It is not often that one can compare a number of Nebbiolo based wines on one night; largely a function of the price. But a few days ago I had this opportunity. 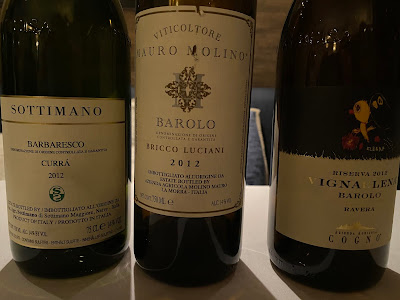 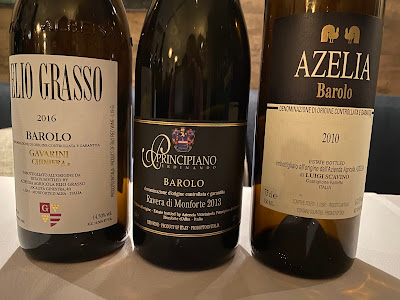 The first set of three wines were from 2012. Sottimano is one of the leading producers in Barbaresco. The 2012 Sottimano Barbaresco Curra is very aromatic on the nose. The palate is complex with red cherry, star anise and leather flavours. This is quite a dry and tannic wine, which comes together well on the finish (94 points).
The 2012 Mauro Molino Bricco Luciano Barolo from La Morra is equally aromatic. This is a lighter style Barolo, the red and black cherry flavours are lifted, and the mouthfeel is elegant. The oak flavours are a little strong, perhaps (94 points).
The 2012 Elvio Cogno Barolo Vigna Elena Riserva is a bigger wine, as you would expect from the Ravera Cru of Novello. The cherry flavours are of dark fruit, and concentrated. The fruit is matched by firm tannins. This is a very good wine from a producer on the up (95 points).
The second bracket looked at Barolo over time. The 2016 Elio Grasso Vigna Chiniera from a great vintage and star producer was amazing. This label is from part of the famous Ginestra vineyard in Monforte. This wine is lifted, elegant, yet of considerable depth. This is a profound wine with fantastic length on the palate and a never ending finish (97 points).
The 2013 Ferdinando Principiano Ravera could not stand quite up to this. It also tasted of dark cherry with very earthy notes and firm tannins - a good wine, but not as rounded and deep as the Elio Grasso (93 points).
Another step down was the 2010 Azelia Barolo. This wine had good length and typicality for Barolo, but maybe a long maceration period dulled the flavours somewhat (90 points).
As you would come to expect, there is no bad Barolo, but there are significant differences, part due to subregion, part due to producer, like in Burgundy. Given the prices, I recommend to try before you buy or develop a following of a producer you like.
Posted by Alontin at 5:06 PM 2 comments:

Shiraz is the most adaptable red wine grape to different climatic and soil conditions.This was very obvious in this tasting of seven Shiraz. There were wines with big fruit weight and less fruit weight, very peppery wines, powerful and elegant wines, and wines with dark fruit and chocolate, tannic wines, and acidic wines - and they were all excellent. 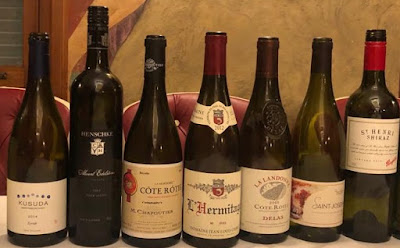 The first wine was the rare 2014 Kusuda Syrah from Martinborough. This meticulous Japanese winemaker produces a wine of intriguing complexity. This is a lighter style with red plum and forest berry flavours. There is green peppercorn spice, good natural acidity, and long stalky tannins. The wine has strong savoury characteristics (94 points).

The second wine could not have been more different. The 2004 Henschke Mt. Edelstone is a big wine, with black fruits, aniseed and strong oak influence. The fruit is concentrated and generous. Everything is balanced, though. This is a really enjoyable typical high quality Barossa/Eden Valley example (95 points).

Then we came to four wines from the Northern Rhone. The first was a mature 2001 Chapoutier Côte-Rôtie. Dark concentrated fruit was dominated by earthy and secondary flavours. Therefore, some layered fruit flavours, which would have been there 5-10 years ago, have disappeared. French oak was strong, and the tannins high. Most noticeable was the high level of acidity, which was too much for me. This wine split the tasters (93 points).

Wine of the night was the 2012 Jean-Louis Chave Hermitage Rouge. Concentrated and powerful, with blackberry and boysenberry fruit, this wine had the hallmarks of premium Shiraz: it is peppery, with some sweetness and silky tannins. At the same time, it was the most elegant wine of the night (96 points).

The 2009 Delas Côte-Rôtie La Landonne gave a really aged impression (not in a bad way). Raspberry fruit, aniseed,  concentrated gamy flavours gave way to earthy and rustic notes on the mid-palate, before it finished with mellow tannins. The balance of the wine was still good (95 points).

A real surprise was the 2016 Pierre Gaillard St Joseph Rouge. This is a highly perfumed wine with fresh floral notes. Dark fruits and earthy components dominate the elegant palate. Salty and savoury flavours add to complexity. This wine shows a great balance between fruit weight, acidity and firm tannins (95 points).

The final wine of this blind tasting was an Australian classic: the 2010 Penfolds St. Henri. This wine is quite big for the brand, reflecting the excellent vintage; deep purple, concentrated, dark. This inky wine of Barossa character has licorice and meat, but is peppery as well. The large barrel used oak plays a support role. Despite its concentration, this wine invites you to a second glass (95 points).

It is Bastille day, reason enough to open a bottle of the quintessential French wine - Bordeaux. I decide on a 2009 Chateau Prieuré-Lichine from Margaux. Prieuré-Lichine is one of my favorite mid-tier producers from Bordeaux (I do not have many). The wine opens up with a very fragrant bouquet, and scents of violets and wildflowers. On the palate, I first taste redcurrant and red cherry. The texture of this wine is elegant. This wine is slightly flat on the mid-palate, as earthy secondary notes take over. The firm tannins are dusty and dry. I enjoyed the smooth finish with good length.

The profile of this wine is what I would have expected from Margaux, but I am slightly disappointed with the lack of power and fruit weight from this good vintage.

There has been quite a tradition by now to fashion GSMs in Australia. The winemakers have managed to understand the contribution of each grape variety and create quite seamless blends. So it is with the 2014 Teusner Avatar. 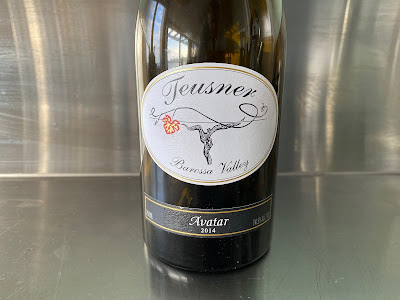 The Grenache contributes upfront raspberry flavours, the Shiraz sweet black fruit and a harmonious mouthfeel, and the Mourvedre firm tannins.

This wine is quite fresh and delicious in the beginning, but by the second glass it starts to get heavy, with the 14.5% alcohol weighing in. The wine has a good length finish.

Posted by Alontin at 5:52 PM No comments:

Yangarra is one of Australia's leading Grenache producers, from sandy vineyards in the northern and hilly parts of McLaren Vale. . Here I taste the 2017 (entry level) Yangarra Grenache.

The bouquet is very pronounced, perfumed and fragrant. It really entices you to taste.

The wine opens with raspberry fruit and some sweetness on the palate, just enough, not too much. The delicate acidity makes the wine a delicious drink now proposition. This is a smooth wine with an excellent tannin structure. Great freshness in this wine!

Posted by Alontin at 1:18 PM No comments:

By accident I tasted another wine from Andrew Thomas from 2009. Semillon is the best ageing white wine in Australia, and the 2009 Thomas Wines Braemore Semillon, from an excellent sandy site in the Hunter Valley, is a prime example. 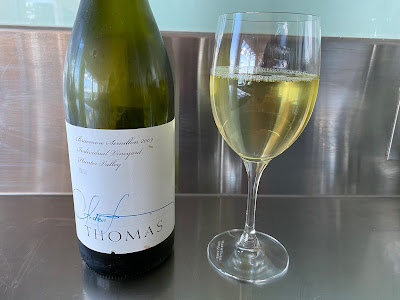 The colour of this wine is still more green than golden. However, the wine has turned from 'acid water' to a well balanced wine. Lime flavours still dominate, but light toast flavours are emerging. The acidity is well integrated, keeping the wine fresh.

This wine is delicious now, but will easily go for another 10 years plus.

I am not quite sure what to think of the 2009 Thomas Wines Kiss Shiraz from the Hunter Valley, at eleven years of age. There are elements of a South Australian Shiraz in this wine, missing the graciousness of an ageing Hunter wine. 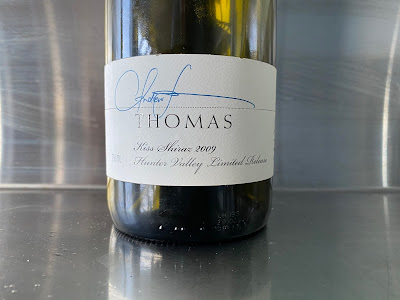 Plum, blackberry and mulberry fruit engulf the palate on entry. Black olive and black pepper add to a solid profile of premium Shiraz. This is a full-bodied wine, ripe and quite dense, but smooth as well, with a sweet core. The tannins are a bit blocked, but have mellowed a lot.

This wine is drinking fine, but is perhaps just past its best.

Posted by Alontin at 8:21 PM No comments:

Most of the times, wine reviewers converge, and while there are differences in scores, praise or otherwise is similar. But then there are exceptions. And if you are an independent reviewer (such as me), you must be prepared to swim against the tide. 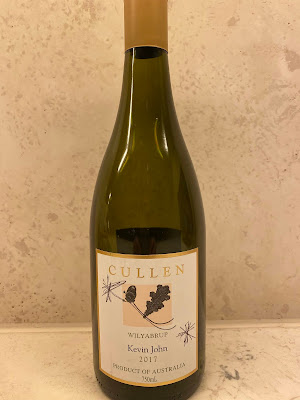 This wine is really overvalued, in my opinion. Is it the aura of Vanya Cullen or the lofty (in an Australian context) price point? The flavours are dominated by white and yellow peach. There is mild citrus and grapefruit, and the oak presence is felt as a nutty character. This oak makes the wine a bit broad in the mouth. Higher acidity would have been beneficial. Having said this, the finish is long and smooth, and satisfying.

To get a 95+ rating, the wine needed to be more layered and have some sort of x-factor. I find none of this. Therefore

Some time ago, I praised the Woodlands 'Margaret' as a great second tier wine. Today, I will follow this up by the 2010 Henschke Keyneton Euphonium. This wine has been left a little bit behind, as the focus has been on the Henschke icon wines on the one hand, and the massive brand extension (not all successful), on the other. It is a blend of Shiraz, Cabernet Sauvignon and Merlot, most of the fruit coming from Keyneton in the Eden Valley.

This 2010 Keyneton is incredibly vibrant, with blackberry, boysenberry, raspberry and forest berries delivering a great fruit cocktail on the palate. Black pepper is also very noticeable. This wine is not as complex as the icon wines, but hey, it is enjoyable - and it is complex enough to create interest. 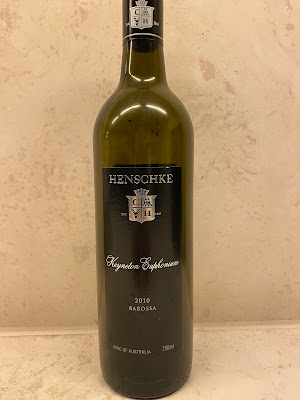 This wine is medium-bodied, still fresh after 10 years. There is some sweetness on the palate, but freshness is more dominant. Cocoa flakes add to the fruit, delivering a terrific mouthfeel.