The Moculta Shiraz is an unusual wine for Spinifex. Initially, Peter Schell never wanted to fashion a 100% Shiraz, but preferred blending wines. However, this is now the third different pure Shiraz wine for him. What is more, it even specifies the vineyard area. Normally, Peter Schell is very coy about his sources. I assume the fruit comes from the highly regarded Fechner vineyard, which also supplies many other well known labels.

The way the first 2010 Spinifex Moculta Shiraz came about, was that Peter Schell noticed different characteristics in this fruit and decided to bottle this separately, even though the fruit profile did not fit his usual interest in fresh and lively characteristics. This one has more of a Penfolds profile of a denser wine with coarser tannins. According to Schell:”it is what it is.” Volume is small.

Yesterday, I opened the only bottle I have of this. The wine is indeed quite weighty, with dark fruit flavours and some meat and charcoal. The wine was matured for three years in large new oak barrels, and the oak complements the still dominant fruit well. This is a big, ripe wine, but still lively. In fact, it will live easily for another 10 years.

While the first vintage was not planned, Spinifex has continued to produce this wine.

What Did We Drink This Christmas?

In some years, I splash out on Christmas drinks. This year, we had good quality wine, but nothing outrageous pricewise. The 2016 Juniper Estate Tempranillo went well with some ham. The cherry flavours were fresh and very lively, although there is not much depth to this wine.

The highlights on Christmas Day were two wines from the not very special 2007 vintage. The 2007 Kreglinger (formerly Pipers Brook) Vintage Sparkling was a perfect complement to the prawns with good depth and yeasty notes matching the effervescence of this Sparkling. This is a top quality Sparkling, matching high quality Champagne. But the real highlight was a 2007 Mount Pleasant Lovedale Semillon. If I am not mistaken, this is the most highly decorated wine in Australia. Not that I am a big advocate for wine shows and medals as a guide for quality. The wine was still fresh, but started to develop hazelnut and honey notes which went perfectly with the white fish and rich salad.

On Boxing Day, it was time for more red wine. The choices were a 2009 Thomas Wines Kiss Shiraz from the Hunter Valley and a special 2004 Henschke Tappa Pass Shiraz from Magnum. The former started to display beautiful velvety tannins, and the latter the typical Henschke Shiraz profile of mulberry and aniseed.

Now, more importantly, what did you drink for Christmas? I have readers from all over the world. Don't be shy. What did you enjoy, what was disappointing? I want you all to write in. 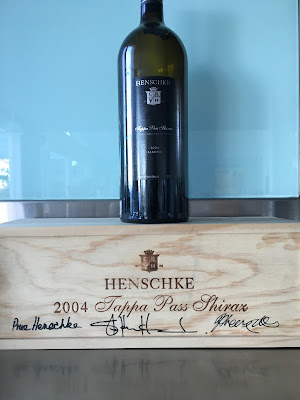 The strip of Terra Rossa soil in Coonawarra was the first soil type which became famous for wine production in Australia. This red clay, combined with warm weather, produces a quite distinctive flavour profile with very intense fruit characteristics. It was noticed, as this stood in stark contrast to the more mineral and structural wines from France. In the last couple of decades, this has become less of a unique feature. French wines  bulked up, and the Parker phenomenon lead to very concentrated wines in other parts of Australia and the world.

Looking at a typical Coonawarra wine today, it is less appealing to me. Yes, the fruit intensity is a plus, but the wines are often not very complex, and the finish can be earthy and broad.

Against this background, the 2015 Wynns Black Label Cabernet Sauvignon is an attractive wine. The wine from this warm vintage is bright and juicy, with concentrated red and blackcurrant fruit. It is a bit full-on on the front palate, but there is sufficient acidity to balance the big fruit. The tannins are firm. Overall, this wine has a well balanced structure. This wine is quite an achievement for a very large production volume.

Is this the best Black Label ever? It would come close, which is fortuitous, given it celebrated the 60th vintage. I recommend to put the wine down for at least five years. The wine will benefit from mellowing of the fruit and tannins.

The 2004 Voyager Estate Tom Price Cabernet Sauvignon is a fairly rare wine. It comes from the best barrels of the year and is named after Thomas Price. He was a partner of Peter Wright and Lang Hancock and helped establish the famous Hamersley Iron Company in the Pilbara. The Wright family is of course the owner of Voyager Estate. 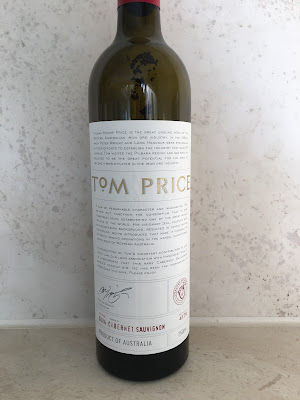 The front label is peculiar, as it is probably the only one in the world which talks exclusively about iron ore. But in any case, what is in the bottle?

The wine is still bright, showing very concentrated fruit, tasting of redcurrant, blueberry and cassis. It delivers quite a thick mouthfeel upfront, but fresh acidity balances the fruit well. The wine has been matured in French oak, 50% new, for two years, but the oak is well matched by the fruit. However, there is a hint of a hole on the mid-palate, often seen in Cabernet Sauvignon. The tannins have softened, the structure still stands firm. I found the finish arriving a bit suddenly.

This is a typical case often found with best barrel selection. Best barrel inevitably means most concentrated fruit. This comes at the expense of nuance and often elegance. This wine is not too powerful and is reasonably elegant, but it does lack finesse. This wine will appeal to many consumers, but did not quite hit the high notes for me.

2015 has been a great vintage for red wine in many parts of the world. Where can you find the absolute outstanding wines? Following, in very brief form, are my recommendations.

In Australia, Pinot Noir from Victoria, pretty much all regions, is outstanding. Tasmania is good, too. The Barossa had a good vintage for Shiraz, quite warm. Depending on your preferred style, you need to focus on producers who make concentrated and ripe wines or those who prefer elegance and freshness. The differences are likely to be significant this year.

Europe had great results in 2015 and would be my go to continent. The Burgundy wines are the best of the decade so far. Cooler sites from higher elevation are best in this warm year. I would opt for Rhone over Bordeaux for sheer drinkability, in particular Chateauneuf-du-Pape with its ripe Grenache blends.

In Italy, wines from Tuscany are outstanding. On the Iberian peninsula,  I would opt for Portuguese wines from the Douro Valley over Spain - a watershed year.

There it is, in a nutshell.
Posted by Alontin at 4:01 PM No comments: 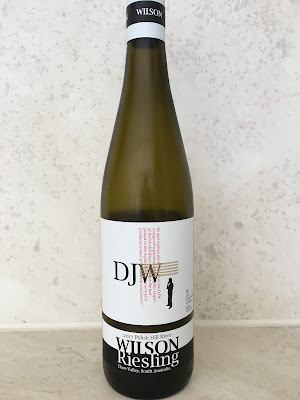 From the most acclaimed Riesling region in Australia, the Polish Hill subregion of the Clare Valley, comes this 2017 Wilson DJW Riesling. This terrific value wine has the typical profile of the area; dry, zesty, and with lime flavours. The special feature of this wine is its strong minerality. The wine comes from a steep vineyard at high elevation. It has a refreshing acidity on the finish. It does not have quite as much drive or is as linear as the Grosset, but this is a mighty fine wine for the hot summer days at less than half the price.

Posted by Alontin at 1:17 PM No comments:

On the weekend, I organised a tasting to identify Australia’s finest Cabernet. This is, of course, a pretty impossible task. So I decided to pick producers who could be winners and select wines from different vintages, ranging from 2000 to 2014. Each participant had to rank the wines from 1to 9. The one with the lowest overall score would be the winner. 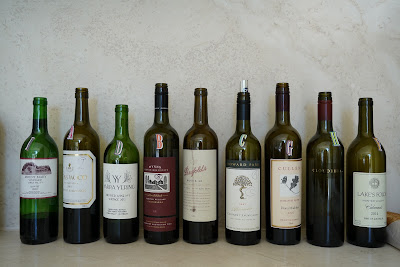 A number of things emerged:

1) The quality of the wines was exceptionally high. As one participant mentioned: There was one clear favorite, every other wine was number two.

2) Five wines were screwcapped, four wines were under cork. The wines under cork did very well, but there was no systematic difference in the ripening profile between the closures.

4) The top wine, by quite a margin, was the 2004 Penfolds Block 42 Cabernet Sauvignon. This wine comes from the oldest known Cabernet Sauvignon vineyard in the world, part of Barossa’s Kalimna vineyard, planted around 1880. It is only made once a decade or so. The flavours are incredibly intense and go on and on, very similar to a great Grange, in fact (99 points).

I would drink any of these wines happily any time a Cabernet is suitable.
Posted by Alontin at 6:18 PM No comments:

Maude, Valli and Burn Cottage are three interesting Central Otago producers. The following is a quick review of their current Pinot Noir releases.

Maude is a small family company, based in the isolated Maungawera Valley near Lake Wanaka. I visited the winery a couple of years ago and was impressed with their complex savoury Pinot Noirs. They produce two Pinot Noirs. The 2016 Maude Central Otago Pinot Noir is from purchased fruit in Central Otago. It shows quite fruity ripe dark cherry with medium length (90 points). The 2016 Maude Mt Maude Vineyard is from the home block. The wine has strong lifted aromatics. Black cherry on the palate has good intensity. Whole bunch adds to the wine's complexity, but fruitiness still dominates (93 points). I prefer the 2014 wines.

Valli is Grant Taylor's venture since 1998. Previously he was winemaker at Gibbston Valley for 13 years. His interest is to show off the characteristics of Central Otago's subregions. The 2015 Valli Waitaki Pinot Noir, from a cooler subregion, has a perfumed aroma and is quite light on the palate. Having said this, the red berry fruit shows good concentration. The 25% or so new oak is well integrated (92 points). The 2015 Bannockburn Pinot Noir is from a cooler site than is typical here, as the vineyard sits on the high altitude terrace. The wine is complex, with cherry, plum, olive and thyme flavours noticeable. The wine is quite reserved now. 30% whole bunch add to the savoury character of this wine. It is my wine of this tasting (94 points).

Burn Cottage is totally focussed on Pinot Noir. The 2015 Burn Cottage Moonlight Race Pinot Noir includes 30% fruit from the estate vineyard, the rest is bought from two other vineyards. This is a very soft and smooth Pinot Noir. This is quite an elegant wine, not too much to think about (92 points). The 2015 Burn Cottage Pinot Noir from the estate vineyard shows that softness as well. Dark cherry and chocolate on the palate, good concentration and a savoury finish (93 points). In 2014 they did something interesting. They exchanged the fruit with Valli, to see what the other winemaker would do with the fruit. The 2014 Burn Cottage Valli Pinot Noir is the most concentrated of the three, but not overly so. The cherry flavour is ripe and smooth. There is raspberry and tobacco, too. The tannins in the Burn Cottage wines are less pronounced than in the other two producers (93 points).
Posted by Alontin at 1:04 PM No comments: