Kooyong has been more serious than most in identifying the specifics of its vineyards and developing distinctive profiles for its single vineyard wines. The Haven vineyard is protected from wind and has relatively fertile soil.

This translates directly into the tasting profile of the 2010 Kooyong Haven Pinot Noir. The bouquet is floral and aromatic, with aromas of violets jumping out of the glass. On the palate, the wine is pure and lush. Elegant red cherry flavours dominate, but there is an immediate complexity with underlying savoury flavours. This is an elegant wine, but unfortunately it falls off a bit at the finish.

Kooyong used to have detailed vineyard information on the label. Unfortunately, it is no longer there with this vintage.

I started day 2 at Rippon. I have always felt that Rippon is a bit like this waterfront restaurant with a beautiful location, where they don't have to try too hard to fill the restaurant. This is a bit unfair, as no doubt they are working hard and seriously. Any biodynamic winery would. But they do play on its beautifully located vineyard a lot. 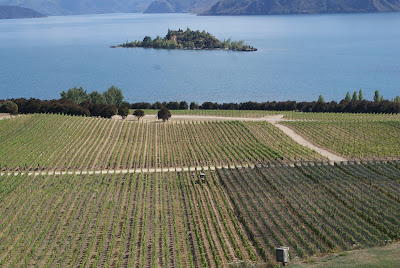 Part of the vineyard is now 33 years old, among the oldest in Central Otago. Schisty soils, together with its location make this a special site. Many vines are still on their own roots. I tasted the 2013 Rippon Pinot Noir, which had mineral character and was quite taut, reflecting the character of the vintage (89 points). The 2011 Rippon Pinot Noir started to show a garnet colour in the glass. This is a delicate and aromatic Pinot Noir with fine tannins, finishing very dry (89 points).

Unfortunately I did not get to try the single vineyard wines. Maybe I would have come away a bit more impressed.

At Felton Road I was not interested to taste finished wines, as I have many in my cellar. I was impressed with the Chardonnay fruit in the barrel. The combination of purity, intensity and elegance will lead to excellent expressions of this variety. An interesting discussion ensued about the inclusion of whole bunch in Pinot Noir. Felton Road's view was that a quarter to a third is beneficial for the wine structure, but more would raise the ph to above 4.0 and mask site specific characteristics. But aren't the stems site specific as well? It would have been interesting to have had Maude's Sarah-Kate Dineen's response to this.
Posted by Alontin at 3:23 PM No comments:

The highlight of day 2 was a visit to the beautiful Mt. Maude vineyard, tucked away in the Maungawera Valley outside of Wanaka, planted in 1994. Like so many in Central Otago, this is a beautiful vineyard, very steep and north facing. The combination of sunshine and higher altitude leads to a slow ripening process and long 'hang time'. 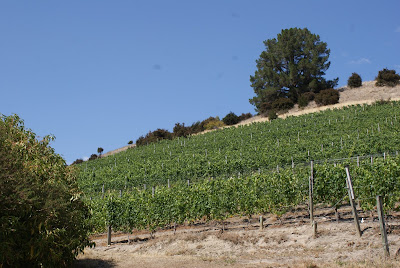 The 2014 Mt Maude Chardonnay is a surprising delight. Surprising, because Chardonnay does not feature  as much in Central Otago as it could. This wine features green apple and other stone fruit, as well as citrus. The palate has weight and richness also, probably because of the malolactic fermentation. The wine is in perfect balance (94 points).

The 2014 Maude Pinot Noir is made from fruit of two leased vineyards in the Greater Cromwell subregion and the home block. This is also quite a complex wine, with dark cherry fruit and savoury components of forest floor dominating. The structure is balanced and the overall mouthfeel elegant (93 points).

The 2014 Mt Maude Pinot Noir is a step up in intensity. This wine includes 100% whole bunch in the fermentation, which is made possible by the long ripening period, as the stalks lignify. This complex wine tastes of dark fruit, bramble and black cherry. It has a slight mineral character, but is a ripe wine all the same. What excited me most was the shape of the wine. Many such wines in Central Otago are round and fat in the mouth, whereas this wine is long, with elegant silky tannins on the finish (96 points).

I could taste the 2009 Mt Maude Pinot Noir by comparison to see the aging effect. This wine was similar in its profile to the 2014, maybe not quite as balanced. It was still lively and had developed beautiful savoury characteristics.

Maude is in the first tier of Central Otago wineries. If you don't know their wines, try and seek them out.
Posted by Alontin at 4:08 PM No comments:

The irrepressible Rudi Bauer started Quartz Reef 18 years ago, after having been the winemaker for Rippon. It is always very educational to have a talk to him, but I missed him this time. Maybe he does not need it anymore, after he is enshrined in history by playing a part in designing the Riedel Central Otago Pinot Noir glass. A special glass for a region just 35 years old - some record. 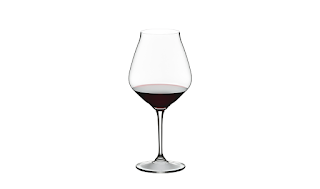 Quartz Reef has been biodynamic for a number of years now and apparently it has lead to deeper roots and grapes with thicker skin - not quite sure why. The cellar door, still in the industrial complex of Cromwell, is still the ugliest in the world. The 2014 Quartz Reef Pinot Noir is typical for the vintage: dark cherry, quite intense and lush, with soft tannins (91 points). The 2013 Ensemble Pinot Noir, from a special block, is dense, black cherry driven. Strong tannins engulf the palate. This is one for the cellar (92 points).

Amisfield is the anthithesis. The bistro is flashy and actually excellent. It outshines the cellar door and wines. The 2013 Amisfield Pinot Noir is quite peppery, with a good structure and firm tannins (92 points). The 2012 Pinot Noir, from a warmer vintage, is also dark, but a bit juicy (90 points). The 2012 Pinot Noir Reserve has 35% whole bunches included and is a lot earthier. It is round in its shape and lacks a strong finish (91 points).

The clear winner on day 1 is Chard Farm.
Posted by Alontin at 6:37 PM No comments:

There are two big trends happening in Central Otago: a move to biodynamics and earlier picking. In a way, Central Otago is starting to suffer from a similar issue to the Barossa and McLaren Vale. Those areas are accused of producing Shiraz which is too big and alcoholic. Central Otago Pinot Noir is sometimes described as a Shiraz drinker's Pinot Noir. It tends to be big and often in your face as well. 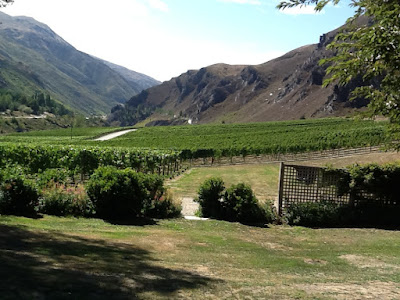 How things have changed at Chard Farm . I talked with Rob Hay, proprietor and winemaker. He does not talk about flavour, but a lot about structure and texture. The first wine I tried was the 2014 Chard Farm Sauvignon Blanc. The interesting thing was that the acids had a much rounder profile and were not as astringent and sharp as those of Marlborough wines. Why isn't there more Central Otago Sauvignon Blanc?

The first of the four Pinots was the 2013 River Run. It is a blend of all vineyards, which share schist based soils with loam on top. This wine is quite light, tasting of red fruit, and with grainy tannins, a reflection of the 2013 vintage (90 points).

The 2014 Finla Mor, a blend of the four Cromwell vineyards, is more agreeable. It is a more generous wine, quite lush, tending towards black rather than red cherry, with a soft finish. Much of this may be due to the 2014 vintage, which produced much gentler wines (92 points).

My favorite of the tasting was the 2014 Mata-Au. This comes from the two best Lowburn vineyards, at relatively high altitude. The vines are now 17 to 18 years old and yield a low 4.5 to 5t/ha. This is quite a perfumed wine, with intense fruit and silky tannins on the finish (94 points).

The 2013 Viper Vineyard Pinot Noir suffers from the tougher vintage. It is supposed to be the super premium wine, but the vintage makes the tannins quite robust. The fruit flavours are interesting, with blueberry dominating, a bit unusual for Pinot Noir (93 points). 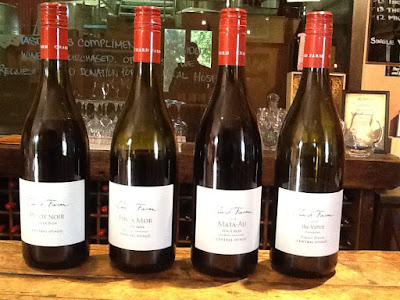 Coming back to my comment about how things have changed. The Pinots have become much more delicate. There is more minerality in the wines. Power has been replaced by silky textures in agreeable vintages (2014).
Posted by Alontin at 6:10 PM No comments:

I was looking forward to tasting the unusual 2014 Cullen Amber wine. I have sometimes lamented the fact that wines do not have enough personality. Well, this wine is certainly different. It is a blend of two thirds Semillon, one third Sauvignon Blanc, but it does not taste anything like the typical Margaret River blend of these grapes. The wine is made like a red wine and sees 4 months of oak. 'Amber' might suggest this is an 'orange' wine, but this is not true either. While the grapes come from biodynamic vineyards, the wine is (lightly) fined in the winery to give it stability. So what is it like?

The colour is a deep gold of great purity. The nose does not give much away. On the palate, this is a full-bodied wine. It carries quite a punch. The high alcohol (15%) gets absorbed by the fruit and oak, though, and is not especially noticeable. Nor are the fruit flavours very pronounced. This wine is very dry, and has some similarity to a sherry or some white Rhone wines. It is about  texture and balance. I am not quite sure what the best occasion for this wine would be, but lobster or crayfish would go well with it. It will be interesting to see what age will do to this wine. I will certainly try it again. 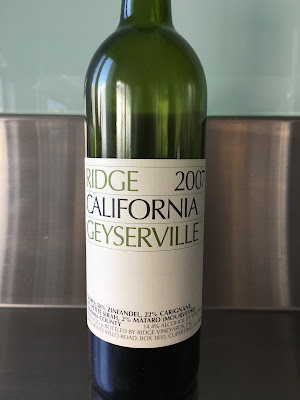 It is astonishing that Australia, possibly the world's most enthusiastic barbecue nation, has very little Zinfandel or Primitivo wines of its own. Zinfandel is the perfect match for barbecued meat.

So I opened a 2007 Ridge Geyserville Zinfandel. Ridge is a very experienced Zinfandel maker, and this wine, from a good vintage, is a typical example. This is a juicy wine. The concentrated blueberry and blackberry fruit hit you on the front palate. The wine is not overly complex, but the fruit takes the 14.5% alcohol well. The structure is balanced and the wine enjoyable, as long as you put some protein with it. It has a few more good years left in the bottle.