Torbreck was the first winery in the Barossa to emphasize the subregional differences in the flavour and structure of the grapes which are supplied to them. This emphasis was actually a key factor in my analysis of the Barossa subregions, and the subsequent book Barossa Shiraz. 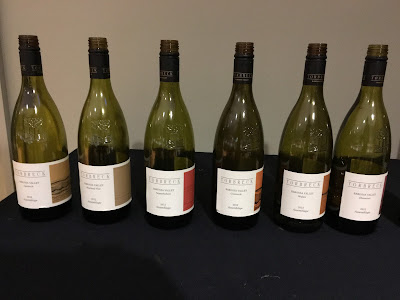 RunRig uses supply from typically eight different vineyards. In this tasting, we tried six components of the 2012 Torbreck RunRig. The two vineyards from the Southern part of the Barossa, Lyndoch and Rowland Flat, were lighter in colour and fruit weight than the others, and showed vibrancy, acidity, some red fruit, graphite and pepper. The Renshaw vineyard fruit (Seppeltsfield) is much richer, and delivers a fuller mouthfeel. There is a vanilla flavour, although the juice has only seen old oak. The Materne vineyard fruit (Greenock) tastes also big in the mouth, but its firm tannins provide lasting structure.

The last two were from the Northern Barossa. The Moppa vineyard produces big and ripe fruit, but  is also refreshing, probably due to the higher altitude. The sweet and ripe component comes from the Hoffmann vineyard at Ebenezer. This vineyard has a significant influence on the overall flavour and structure of RunRig. Only very little Viognier needs to be added (1.5%), to give the final wine a lifted character.

The tasting very much aligned with my understanding of the Barossa subregions. Unfortunately, we did not get to taste the finished 2012 product, but tried the 2013 Torbreck RunRig instead. I was not too impressed by this wine. It was quite sweet and plump, and the Viognier influence was too strong. I thought the Materne vineyard component and the Hoffmann component from 2012 were better than the 2013 finished product.

Posted by Alontin at 8:36 PM No comments: 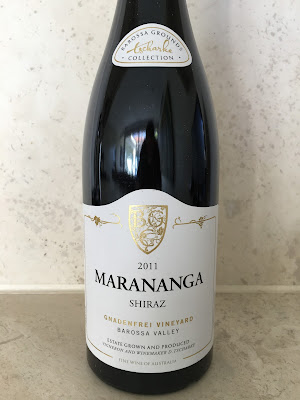 A little while ago, I was offered the wine pictured above for an incredible price of significantly less than $20 per bottle. Damien Tscharke is a young, promising winemaker, and Marananga is arguably the sweet spot of the Barossa. I know that his vineyards in the area are mature. 2011 was a very wet vintage, so I thought maybe the wine will be a little bit thin, but it should do for a quaffer.

I should have done more homework. What I got was a total surprise. This is a 15% alcohol wine. The only way, in my opinion, this could have been achieved in this year is by reverse osmosis, where water is reduced from the liquid to improve must concentration, which also increases the alcohol level. It appears the fruit was also picked very late, as it tastes burnt and dead. The wine is very oaky, fruit and oak are not well integrated. This wine is badly made, trying to turn a poor natural outcome into something else, to then only resulting in something worse. It goes without saying that the wine tastes hot on the back palate and leaves an alcoholic after taste.

It is a shame that the label mentions Barossa Grounds, as this is the name of the worth while terroir project in the Barossa. I know a bit about terroir in the Barossa, and this wine has none of it.

The term Rhone Rangers was coined for Californian wine makers producing wines from Rhone varieties, in particular Shiraz and Grenache. It should really be a term for Australian winemakers, as Shiraz, Grenache and blends are much more prominent in Australia than in the US.

At this particular tasting, 14 wines were presented, 2 whites and 12 reds. The whites were nothing special, so I will focus on the red wines. I will describe them in three tiers of quality

The wine of the night was a real surprise. It was the 2014 Tellurian Heathcote GSM.  This wine was lively with lifted and spicy aromas, and a good intensity of plum, raspberry and strawberry flavours. The fine tannins lead to a smooth finish. The other wine at this level was the 2014 Clonakilla Shiraz Viognier. This wine showed the typically fragrant bouquet. On the palate, dark berry flavours stood out, leading to a very long and silky finish. I just found the lifted element of the Viognier a bit too much.

In the second tier were the 2012 Chapel Hill Bush Vine Grenache with rich raspberry flavours and some earthy notes, but a slightly alcoholic finish. The 2014 Sons of Eden Kennedy GMS has a focus on ripe red fruit, cherries and wild berries, and was well balanced. The 2012 Spinifex Esprit, also a GSM with some Cinsault and Carignan thrown in, was fresher and more elegant, with good complexity, but lacking mouthfeel a bit.

The best in the third tier was the 2014 Tahbilk GSM. Grenache flavours dominate in this wine, but oak is more prominent than fruit. Having said this, the wine is quite harmonious and elegant. The wines I liked less were the 2012 Evans & Tate Redbrook Shiraz (harsh tannins), the 2014 McWilliam's Appelation Canberra Syrah (lacks mouthfeel), the 2015 Purple Hands MSG (not balanced), the 2013 John Duval Annexus Grenache (big and plump), and the 2014 Schild Barossa GMS (raspberry bomb).
Posted by Alontin at 10:11 AM 2 comments:

I have been looking forward to taste the 2007 Two Hands 'Zippy's Block' Shiraz. Two Hands is mainly known for its Garden series, a range of Shirazes from different regions of Australia. This is the first time it made a single vineyard wine, to my knowledge. I thought this is a major challenge for three reasons
- Two Hands likes to make ripe wines, focussed on the US market
- 2007 was a hot, drought vintage
- Zippy's vineyard is on Roennfeldt Rd, Marananga, the golden mile of super charged Australian Shiraz

Will this wine be overripe and dead after eight years?

What a surprise I got! The bottle is very dark, so you cannot see any colour of the wine. And after opening, it is the bouquet which hits you first. Strong aromas of blackberry and plum, as well as oak flavours dominate. On the palate, this is of course a full-bodied wine, but it is balanced, with some charme. This wine is a perfect example of the 'Big Barossa', a wine style quite unique in the world. This Shiraz fires on all cylinders, it may be too much for someone used to a four cylinder car, but everything seems to be in proportion. The 14.7% alcohol is taken well by the fruit, as is the oak. The intensity and depth of the fruit is exceptional, a bit like a first class jam. Drinking a second glass could be a challenge, but I could not resist this exciting package. This wine will go well for another 7-10 years easily.

De Iuliis is one of the serious Hunter Valley Shiraz producers (not all of them are). The Charlie is their flagship wine.

I tasted the 2009 De Iuliis Charlie Shiraz. This is a medium-bodied wine. At seven years of age, it is still refreshing. The wine is well rounded with some spice, like a cool climate Shiraz. It is silky on the side of the palate. The finish is clean, slightly short. This wine made me want to drink a second glass.

The wines by Marchand & Burch seem to fly under the radar of most wine consumers. This is a pitty, as these Burgundian inspired wines in this French/Australian partnership of experienced winemakers are well worth seeking out.

The 2014 Marchand & Burch Villages Chardonnay obviously means in analogy to Burgundy that the grapes come from different vineyards, in this case from Porongurup in the Great Southern region of Western Australia. The colour of the wine is light golden. The flavours are pure, and the wine tastes of passionfruit and pineapple, with minerality underlying the palate. This is a well balanced, medium-bodied wine with a dry finish. More precision on the palate would have allowed an even higher score. Great value.

Tonight, I am drinking the 2008 Vina Muriel Reserva. This is probably because I spent the last couple of days preparing my trip to Spain, where I will be visiting the wineries of Ribera del Duero in a month's time. However, this wine is a classically made Tempranillo from Rioja.

The colour is a bright ruby red, still. On the palate, there is the expected red cherry flavour. It is quite concentrated and deep, and also quite pure. Herbs add to the flavour spectrum, which otherwise is not too complex. The wine is quite acidic, and the tannins are surprisingly firm for a Tempranillo. The wine finishes quite dry.

There is a lot of agreement that Grosset's Polish Hill is Australia's best Riesling - probably more agreement than about any other major variety. What stands out year after year is the purity and precision of the citrus flavour, the perfect balance and the long finish. But what happens with an aged wine?

Today, I am describing the 2008 Grosset Polish Hill Riesling. This middle aged wine has a brilliant golden colour, still quite light. On the palate, the flavours have shifted and become much more mature (more than I expected). The wine now tastes of glazed pear, macademia nut, and slightly toasted. The acidity and balance is still excellent. And the purity and precision are still present, leading to a long finish. The minerality lingers on the tongue for some time.

There are many Australian Shiraz lovers who rate the Mt Edelstone amongst their favorite wines. And there many very exquisite examples of this wine. However, vintage variation is significant. Yesterday, I had a bottle of the 2005 Henschke Mt Edelstone. How did it compare?

This bottle opened up to an intense forest berry aroma - remarkably fresh, but this is a screw capped bottle. On the palate, dark berries, mulberry and aniseed flavours combine to an exotic and intense mouthfeel. This wine is quite ripe, very smooth, with a slightly sweet core. You notice the alcohol, but it does not overpower, and the long, well structured finish is satisfying.

This wine is walking a tightrope of ripeness, but the wine holds together for a distinguished experience.

My page views have more than tripled in the last few weeks, with big numbers from the US and Australia. Thank you and keep it going!
Posted by Alontin at 5:46 PM No comments: