I still remember when I first met Wayne Dutschke. We had to go to a restaurant to taste his wines, as he had no facility to do so. Dutschke is a somewhat unfortunate name, as the former leader of the Red Army Faction in Germany in the 70s was called Dutschke, but not many will remember, and he is a very charming man anyway.

He has come a long way since then with a range of wines from the Lyndoch subregion. The Oscar Semmler is his premium wine, coming from a block of the oldest vines of his St. Jakobi vineyard.

The 2010 Dutschke Oscar Semmler Shiraz is full-bodied, yet a lively wine. Blackberry flavours stand out in this well balanced wine. The fruit stays strong to the back palate, until finely grained, but firm tannins take over on a long, long finish. This is a thoroughly enjoyable, modern Barossa Shiraz, not light, but fresh and delicious. Best drinking time: 2015-2017. 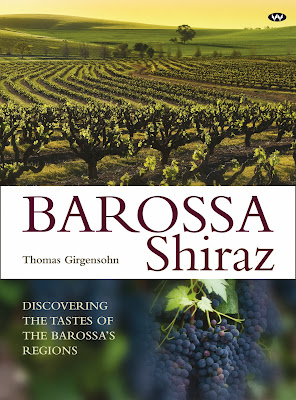 This blog does not engage in promotion nor advertising, but I must make an exception, given I just published a wine book.

Barossa Shiraz: Discovering the tastes of the Barossa's regions is the first book in Australia to systematically investigate the relationship between the flavour and structure of a wine and its origin. Barossa Shiraz divides the Barossa into eleven sub-regions, each with its own terroir. Major differences between terroirs are identified, and a tasting profile for each sub-region is provided. Major wineries and benchmark vineyards are discussed. Their locations are shown on detailed maps, and the book includes profiles of leading Barossa winemakers.

Reading Barossa Shiraz will enable enthusiasts to appreciate the differences in flavour and structure of Shiraz - and to enjoy their wine even more.

Andrew Caillard, MW: Thomas Girgensohn's observations and intuitive tastings, based on extensive personal experience and systematic review are topical, sagacious and prescient... Barossa Shiraz is a remarkable and enlightened achievement.

For more details visit the publisher's website www.wakefieldpress.com.au. You can order the book there or from any good bookstore.
Posted by Alontin at 9:51 AM 3 comments:

I have spent the last 10 days in Japan and tried to come to terms with sake (not the major objective of this trip). I thought I might share some basics with you. The two major dimensions by which sake is distinguished are the amount of rice grain which is used and the brewing method.

Junmai is the basic variety, based on rice, water, yeast and koji (mold). Honjozo has 30% or less of the rice grain milled off. This gives the sake more intensity of flavour. The next level is Ginjo, where up to 40% is shaved off, and the most intense sake is Daiginjo (Dai-ginjoshu), where up to 50% of the rice kernel is taken off.

The previous sakes usually have about 15% alcohol. Then there is Gensyu, which is not diluted with water and has a 17-20% alcohol content. It has deeper and richer flavour. There are some other, less important variations.

Within each category, you can have higher and lower quality. This is also subjective, and depends on at least five dimensions: dry-sweet, acidity, savouriness, flavour notes (apple and banana are often dominant), and fragrance. Most highly regarded sakes are those, which have these dimensions in harmony and have a quick disappearing finish (very different from wine assessment).

I found it quite difficult to assess sake in this brief period of time. It is as complex as our wine, but maybe this note helps as an initial introduction.
Posted by Alontin at 10:53 PM No comments:

At a recent larger gathering of people tasting the 2013 Rieslings of Jeffrey Grosset, I was astounded to find that half the group favoured the Alea off-dry Riesling over the Polish Hill.

The 2013 Grosset Polish Hill Riesling starts with citrus flavours, but I taste mainly apple rind in this wine. The wine is quite lean and astringent at this point (maybe this put some people off), but I loved the minerality, preciseness and linearity in this wine. This feature is unmatched in Australia.

The 2013 Grosset Alea Riesling is regarded as an off-dry wine with 9 grams of residual sugar. This is right borderline to the 'trocken' definition in Germany, and Jeffrey Grosset calls it no longer off-dry. The wine has a bigger mouthfeel and some sweetness throughout, but with a fresh finish. What makes this wine less good than the Polish Hill is the fact that it is less precise on the palate and delivers less minerality, a key feature of a top Riesling, in my view.

As it happened, I drank four highly regarded wines over the last few days (a little while ago):

Most of the time, wines are compared in the same class, but what about comparing what you might have drunk? The criterion in this case is really the enjoyment factor, and I am not going into a detailed analysis here.

Needless to say, all the wines were quite outstanding. I am more of a red wine drinker, but I got most enjoyment out of the Grosset Riesling. This wine is simply fantastic. Age has added  toast and lemongrass flavours, but the wine is still fresh and beautifully balanced. The Moss Wood Cabernet was also excellent. Still vibrant, the Cabernet fruit is beautifully polished and runs seamlessly over the palate towards a velvety finish. No heaviness here. The RunRig is a different story, of course. This wine is big with a capital B. The first glass is the best - and it is quite exceptional. It is a rare skill to incorporate such ripe and alcoholic fruit into a drink which clearly tastes like wine, and not port. This is a uniquely sun-kissed, Australian wine. The E&E is not quite as big, but combines concentrated fruit with intense chocolate flavours - an attractive match.
Posted by Alontin at 8:29 PM No comments:

The 2012 Clonakilla Shiraz/Viognier is quite a special wine, like many before. The vineyard is at high altitude and the grapes grow on deep granite soil. But it is not just the terroir that makes this wine special. It has a lot to do with Tim Kirk's skill, who very deservedly was crowned Winemaker of the year this year by Gourmet Traveler Wine magazine. 2012 produced a low yield and thick skinned grapes, which produced quite intense flavours.

In a blog-post in the past, I discussed some of the less often cited criteria which make wines great. One was 'paradox'. And this is what I find in this wine. The wine is savoury, with a lot of depth, but there is also some sweeter fruit on the back palate and floral aspects throughout. The wine appears quite linear, but also has a satisfying mouthfeel. - This complexity delivers the wine's unique personality.

As I mentioned before, I wanted to find out if Macedon can be a region producing exceptional wines, or if Bindi and Curly Flat are outliers and for what reason. Macedon is quite different from what I expected. It is less than an hour north of Melbourne, but feels very remote. You can (and I did) actually get lost in the hills, and the Hanging Rock mistery feels quite real.

Hanging Rock was actually the first winery I visited. It is best known for its Sparkling wine, but I wanted to taste the still wines. The 2009 Jim Jim Chardonnay was what I expected from the area: a citrus tasting wine, quite closed and austere. I liked the style (92 points). The 2012 Macedon Ranges Pinot Noir was less convincing. It was a focussed and very spicy wine (90 points). The 2011 Members Reserve Shiraz had a strong fruit core, but a slightly rough structure (89 points). I also tried their 2009 Heathcote Shiraz. The colour of this wine was a strong purple, with attractive dark cherry and redcurrant flavours on the palate. Spices added complexity to this well rounded wine (92 points). Overall, I thought this was not a bad portfolio of wines.

Like Hanging Rock, Curly Flat is located 500 meters above sea level. The 2011 Lacuna Chardonnay is made in a Chablis style, unwooded, where citrus and minerality dominate (90 points). The 2010 Curly Flat Chardonnay shows more complexity and depth of fruit, but is quite heavily oaked (92 points). Williams Crossing is the attractively priced second label Pinot Noir. The 2011 Williams Crossing has a beautiful strawberry/cherry fragrance. The wine is relatively light, with silky tannins and well structured (92 points). The 2010 Curly Flat Pinot Noir, grown on rich red volcanic soil, has the expected fruit intensity and delivers a good mouthfeel with silky tannins and a long finish. It does not have an x-factor like the 2006, but is recommended (94 points).

Cope Williams is even higher at 650 meters above sea level. Again, it is best known for Sparkling wine, but I wanted to try the still wines. On tasting were fairly old Chardonnays. The 2006 Chardonnay tasted of citrus, with a fine fruit focus. The wine was still crispy after seven years (92 points). The other Chardonnay was the 2000 Chardonnay. Wow, who would dare to open a thirteen year old Chardonnay? This wine had more toffee flavours, and the structure was still holding. The cold climate here obviously adds acidity and aging potential. This was an unusual wine, of which I bought a few bottles (94 points).The 2001 Pinot Noir, in contrast, was a shocker. It tasted of licorice and was over the hill (less than 80 points). The 2006 Shiraz did not ripen properly and was no good, either (80 points).

So what about the Macedon as a region? Why is it that only a small number of wineries shine? I think I found the answer. Many wineries are run more as a hobby, being so close to Melbourne. Some are a side show to function centres and similar. In addition, the extreme climate means that some vintages can be very difficult and require constant attention and a focus on detail. As a result, only the most focused operations will succeed consistently, but then they can produce extraordinary flavoured and long lived wines.
Posted by Alontin at 3:48 PM No comments:

The hallmark of Penfolds is the longevity of its wines. I was therefore looking forward to open a bottle of the 1998 Penfolds RWT Shiraz. This was a great vintage, but I found this RWT quite disappointing. It is supposed to be quite different from Grange, full-bodied, but a little gentler

This wine was quite thick on the palate, with a wall of blackcurrant attacking the mouth. The French oak was  also quite prominent. This is a big, alcoholic wine with some burnt fruit and tough tannins. I give it a reasonable score, because the structure will deliver a long living wine, but the flavour profile was not to my liking.