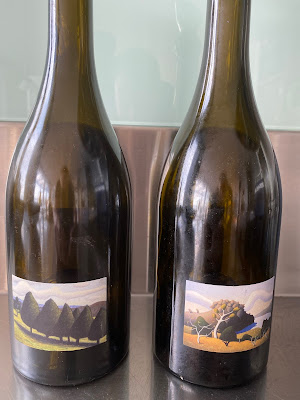 Gippsland on the left, Yarra Valley on the right

The colour of the Gippsland wine shows some development with its brown tinges. This experience continues on the palate. There is still dark cherry and mulberry fruit, but the wine has lost some tension. The tannins have mellowed and are now more dull, rather than silky, different from what I remember on release. This wine has lost its finesse. It has aged quite significantly after only seven years - too quickly for a premium wine.

The Yarra Valley wine from 2013 shows similar colour development. However, this wine is more interesting on the palate. There is still some freshness. The fruit is in the red and black cherry spectrum. There is a bit of spice, and there is more drive towards a more rewarding finish. But again this was a better wine when drunk young.

It makes a statement, if somebody uses cork as closure on a bottle of Rosé, even more so if it is an Australian wine. This is meant to be serious. This impression is amplified when a glass is poured. 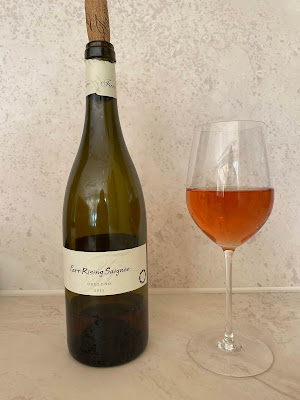 This 2015 Farr Rising Saignée has an intense orange colour, actually similar to the sunrises observed in eastern Australia during the bushfires. The saignée method means the wine is used as a by-product to red wine production. Some of the juice is removed early, and then fermented separately. It is astonishing to me that such colour intensity is achieved with this method.

The intensity carries through to the palate; rose petal, orange peel, some raspberry and red cherry flavours are fashioned into a precise mouthfeel. This wine has incredible drive and energy and a balanced dry finish. This is by far (no pun intended) the best Rosé I have ever tried, and it is drinking perfectly at five years of age.

When Alex Head started his operations in the Barossa Valley about 15 years ago, he brought some fresh ideas to the valley. Picking grapes earlier, focus on freshness and fruit, maturing wine in larger format oak barrels. So I was looking forward to drinking his 2012 Head Old Vine Grenache with this in mind. 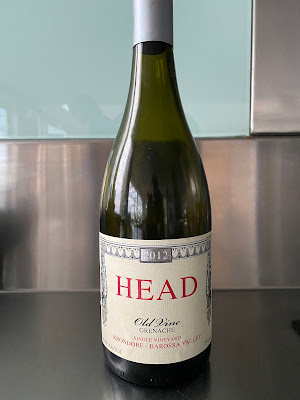 When I poured the wine, it had a pronounced orange tinge in its colour. This made me concerned, and rightly so. The wine was very developed. There was a bit of raspberry fruit, but savoury characters dominated. They were not pleasant. The wine tasted of burnt fruit, a bit salty, too. The tannins were quite coarse and the finish harsh. Something has gone wrong here. Not sure if it is the wine making (this may have been the first vintage of this wine) or if the bottle got heat affected. Unfortunately, there is no proper cold chain in the transport of wine in this country.

Posted by Alontin at 8:28 AM No comments:

I have taken advantage of the cooler conditions and opened a bottle of Shiraz which was hiding in my cellar. This was a magnum of 2004 Dutschke St. Jakobi Vineyard Shiraz from the Barossa Valley. 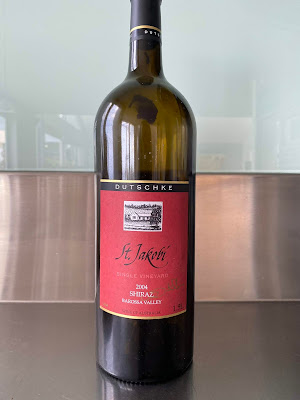 My expectations were not too high, given this is a 14 year old full-bodied Australian Shiraz; but then there is always a bit of magic drinking from magnum, and the St. Jakobi vineyard is an excellent vineyard of dark clay soil in Lyndoch, right next to where most of Grant Burge's Meshach fruit comes from.

It turned out to be a positive surprise. The plum and blackberry fruit is blended with spice and dark chocolate and delivers a complex, ripe, big mouthfeel. The fruit takes the 15% alcohol well. This is a balanced wine, scoring high on all dimensions. It is not everybody's cup of tea, but a good example of the "big Barossa". The wine is drinking well now.

The Hunter Valley is regarded as the cradle of Semillon, but occasionally great Semillon is made in the Barossa. Peter Lehmann's Semillon is the best known. These Semillons tend to be more generous, offering a fuller mouthfeel than those from the Hunter. 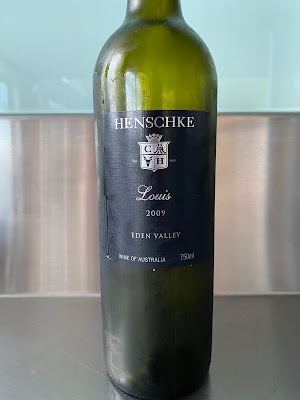 I tasted a 10 year old Semillon from Eden Valley a couple of days ago, the 2009 Henschke Louis Semillon. This is not a well known wine in the Henschke stable of wines, but maybe it should be. The fruit comes from the Henschke home block.

Similar to the Mount Pleasant Lovedale I reviewed a few days ago, the colour is starting to fill out golden, but is only beginning to do so. It is therefore no surprise that primary fruit is still very present. The citrus is more lemon here rather than lime. It is still a fresh wine with a good acid profile. The wine is on the leaner side, unlike the typical Barossa profile.  This Louis is well balanced and was enjoyable to drink.

The ratings scales wine reviewers use reflect their view on absolute quality. It is subjective, of course, but it is meant to give an absolute measurement. A second rating has been included by some wine writers. It has been referred to as a hedonistic scale or just recently as an emotional rating. I have used a second scale for a number of years to indicate my personal enjoyment of the wine.

But what I want to address here is something a little different. A number of wineries, including some at Margaret River, have introduced 'special' wines produced at very low volumes, and sold at extremely high prices. These wines tend to be of high quality, although not necessarily to everybody's taste (think overripe Barossa Shiraz). They include the best grapes and are meticulously made. No argument there.

However, do these wines represent the general quality of the producer? I think not. The leading Bordeaux Châteaus normally produce their first wine at the highest volume. The second and sometimes third wine is a 'declassified' wine. Coming back to Margaret River (which is where my thoughts about this originated) Cullen's Diana Madeline and the Moss Wood Cabernet Sauvignon are relatively high volume for these wineries and are legitimate representatives of their quality. But does the Tom Cullity really reflect Vasse Felix or the MJW Voyager Estate or the Vanya the Cullen winery?

It would be great if we could construct a quality index which gives a rating to each wine, weighted by its volume and thus determine an average rating for a winery. This would be a lot better than the five star rating by James Halliday. Unfortunately, the data is almost impossible to gather for a meaningful number of wineries. 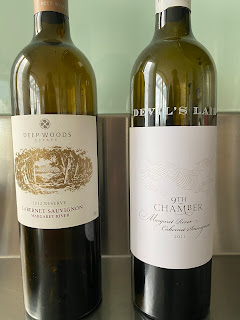 The top Cabernets from Margaret River are no doubt Cullen's Diana Madeline and the Moss Wood Cabernet Sauvignon. A number of wineries are working hard to join them. I tasted two contenders recently.

The 2012 Deep Woods Reserve Cabernet Sauvignon shows an attractive fruit profile of blackcurrant and boysenberry. Earthy and meaty flavours add to the complexity. The wine is a bit more developed than I expected. This also showed in the mellowing colour of the wine. Nevertheless, the wine is well structured, but not quite as elegant as Cullen or as rounded in the mouth as Moss Wood.

The 2011 Devil's Lair 9th Chamber Cabernet Sauvignon delivers good blackcurrant intensity, but not the complexity of the Deep Woods. There is quite a lot of acidity and dry tannins coming through on the palate. The wine is not quite in balance. It should definitely be decanted. It showed a little better after a while.

This review raises another discussion in my mind when thinking about the scene in Margaret River. I will address this in my next post.

Posted by Alontin at 8:44 AM No comments: 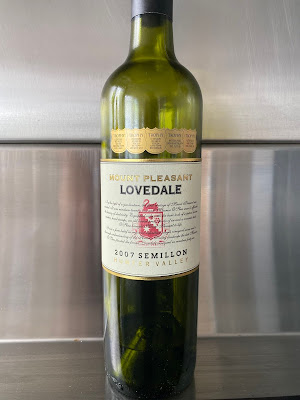 The Lovedale vineyard is one of the top five Semillon vineyards in the Hunter Valley, with its vines now 70 years old; this 2007 Mount Pleasant Lovedale Semillon only 12 years. As the label shows, this wine won many trophies on release.

Semillon can age incredibly well. 12 years is only mid-range. The colour of the wine has started to turn golden, maybe a little earlier than some. The citrus aromas are strong.

Lime flavours dominate the palate still, but some toasty notes are starting to show. This Semillon is a little broad on the palate. I would have wished for more acidity.

This wine is probably in transition, and I have opened it at an unlucky time. It misses freshness, but has not developed a mature profile yet.

Posted by Alontin at 2:28 PM No comments: