My visit to the region was very exciting. The qualities of wines I tasted was very impressive, indeed. Unfortunately, I am not able to report in detail, as I am writing an article about this experience in one of Australia's leading wine magazines. I will just say that I had three world class experiences
- visit and tasting at Vega Sicilia, which is undergoing an interesting evolution
- an overnight stay at Abadia Retuerta, an outstanding vineyard accomodation
- the Atauta valley, remote, pre-phylloxera, literally hundreds of sub 1ha plots of 100+ year old tempranillo vines, culminating in the astonishing wines of Dominio de Atauta

If you visit Spain for wine, don't just visit Rioja, visit Ribera del Duero.
Posted by Alontin at 5:12 AM No comments:

To get in the mood of Ribera del Duero, which I will be visiting for the next three days, I tasted the 2002 Pesquera Millenium Reserva, only the second release of this wine since 1996.

This wine is very attractive on the palate, with black cherry, bramble, smoky bacon and spices from French oak coming together very well. The wine is quite intense and brooding, yet elegant and harmoneous. I liked the French oak treatment and the velvety texture of this wine. This Tempranillo is pure and penetrating with fine tannins on the lasting finish.

This wine is still youthful revealing a very balanced structure. If this is the standard I will be getting for the next three days, I will be in for a treat.

Grenache is still fighting to be taken seriously. Does it need to be blended? Look at Garnacha from Priorat. Can it improve with age? Sure, just look at Chateauneuf-du-Pape.

This 2007 Kalleske Old Vine Grenache is now 9 years old. It is quite a savoury wine, with an earthy elegance, like a wise old man. Raspberry and strawberry flavours are still coming through. The wine is ripe and full-bodied, with good depth of fruit. There is no dead fruit here, and the wine is not overpowering. The tannins are smooth and silky on the finish.

This is a top flight Grenache. Highly recommended.

The 2012 Farnese Edizione Cinque Autoctoni has been bestowed with  extraordinary acclaim: best Italian red wine 2015 and 99 points (and not even by the points master James Halliday). It is an unusual wine, in that it blends Montepulciano and Sangiovese grapes from Abruzzi with Primitivo (Zinfandel), Negroamaro and Malvasia Nera from Puglia. Therefore the name Cinque Autoctoni. Montepulciano, Sangiovese, and Primitivo are the dominant grapes of the blend. This signals acidity and tannins.

Lifted aromas emerge on opening the bottle, blackberry and cocoa. On the palate, there is plum and sour cherry to start with. The wine is quite dense and meaty, filling the mouth well. It is an elegant wine on the front and mid palate, with the acidity cutting through the concentrated fruit. The tannins are a little coarse, and detract from an otherwise fine finish.

This is an unusual and serious wine. But almost perfect (99 points)? Not close.

Australian Semillon is typically associated with the Hunter Valley, where it is a signature grape. Not many know that the highest volume Semillon in the country is bottled by Peter Lehmann, from Barossa fruit. There is a fair bit of Semillon in the Barossa Valley.

Torbreck's entry level is the Woodcutter's range. Today, I am reviewing the 2014 Torbreck Woodcutter's Semillon from the Barossa Valley. The colour is a deeper golden than Hunter Valley Semillon. There is more flavour complexity on the palate. Next to citrus, pineapple and grapefruit flavours emerge. This is a fuller, richer Semillon (it is Torbreck after all), yet it has retained some freshness. The wine does not have much acidity, yet is well balanced at present. The finish is relatively short, but I enjoyed the wine.

Whereas Hunter Valley Semillon is best enjoyed with fish, in particular sashimi, I would suggest this wine to go particularly well with salads. Best to drink now, while fresh.

The 2008 William Downie Gippsland Pinot Noir was the first Gippsland release for William Downie. And what a release it was. Today, this wine still shows a ruby colour. It still looks and smells like a younger wine.

There is red cherry and a hint of strawberry on the palate, and a slightly sour taste. This is still a vibrant wine with depth and minerality. The texture of this wine is excellent. The palate is engulfed by the wine's acidity and its subdued silky tannins. This is a very smart Pinot Noir, very varietal, like a Burgundy from a very good year. 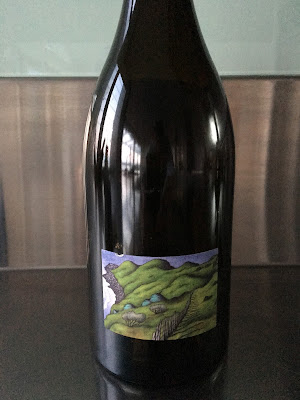 William Downie is one of Australia's leading Pinot Noir winemakers. He trained under Phillip Jones of Bass Phillip for a while. William Downie makes three different Victorian Pinot Noirs from the Mornington Peninsula, the Yarra Valley and Gippsland.

This is the 2008 William Downie Mornington Peninsula Pinot Noir. The colour of the wine is between red and garnet, showing some development. The colour is still deep. The complex flavours of red and black cherry, as well as savoury notes have good intensity, but also some ethereal qualities on the back palate. Mornington Peninsula Pinot Noir is sometimes accused of being too plummy or one dimensional, a Shiraz drinker's Pinot Noir. This wine is not like that. It is well balanced between fruit, oak, acids, and tannins. This wine is pleasingly long on the finish, expressing excellent varietal character.

This Downie is a smart and sophisticated wine, good to drink now.

I thought a special wine was in order on election night in Australia. The Schubert Theorem states that every knot can be uniquely expressed as a sum of prime knots. Well, didn't the election turn out to be a knotty affair. Translated into the wine world, the vineyard from which the grapes come is the Schubert vineyard on Roennfeldt Road, Marananga, Barossa Valley. The analogy to the Theorem is that the vineyard has been deconstructed to take the best parcels of fruit from different sections and then assembled to hopefully more than the sum of the parts. I was really looking forward to this. 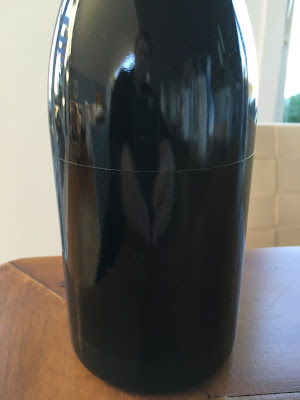 Now, the label is probably the weirdest I have ever come across. It is totally black, and the mathematical formula of the Theorem is on the front. If you enlarge the picture, you may identify some scribbles. The back label looks the same, with minimal, by law required information. Clearly not made for marketing, but for mystique.

I am drinking the 2010 Standish 'The Schubert Theorem'. When I pour the wine, another first happens. This wine is black. I have never described a wine colour thus. On the palate, there is a lot of complexity. Fruit flavours are blackberry, and very intense, but also blueberry with freshness. There are also earthy and mineral notes. This is clearly a massive wine. It is not overripe, but like jam without any liquidity. The alcohol is noticeable, although notionally 'only' 14.5%.

This wine is made in the tradition of big Barossa Robert Parker wines, but it is a bit smarter. I found the first glass absolutely great, but the second a bit of a struggle. If you enjoy wines from Greenock Creek or premium Torbreck wines, you must give this wine a try. It will live for 20 years. 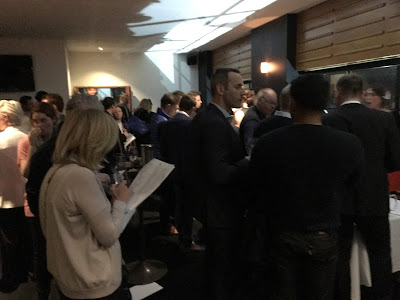 A full house at this tasting

As you can imagine, this was a pretty comprehensive tasting. Still, some significant producers were missing, most notably Penfolds. However there were a lot of interesting wines to try. I managed about 30, mostly ultra premium.

The two most impressive wines for me were the 2013 Langmeil Orphan Bank, and the 2012 Clarendon Hills 'Astralis'. These were quite different wines, though. The Langmeil Orphan Bank has an interesting history. It consists of individual very old vines (100 years plus), which have been moved and put together into a vineyard near the winery. Thus the name. The vineyard is near the Para River on alluvial soil, which is quite rich. The wine is elegant, with significant, but not overpowering fruit depth. This is a well balanced wine with a lasting smooth finish. The Astralis is a bigger, full-bodied wine, yet elegant as well. The tannins are silky, and so is the finish. The second Clarendon Hills wine on tasting, the 2013 Domaine Clarendon shared some of these characteristics. It is not as intense, but excellent value at a fraction of the price.

Six other wines stood out for me:
- 2012 Head Redhead, from a high altitude vineyard in Eden Valley (very elegant)
- 2014 Glaetzer Amon-Ra, with beautiful blackberry fruit and a similar profile to the Langmeil wine, but not as precise and penetrating
- 2013 Anstead & Co No 1 from Bendigo, a well balanced wine from a producer I know nothing about and cheap as chips
-2013 Mount Langi Ghiran, with its usual pepper flavours, a smooth wine with good length
-2014 Spinifex Bete Noir, black fruited, smooth, and feminine
-2013 Spinifex La Mouline, a more masculine wine with grip, but still elegant.

Then there was a group of highly regarded wines, which were generally good, but lacked in one aspect. This I will mention. If this does not bother you, these may be for you
- 2012 St. Hallett Old Block - a bit light
- 2012 Henschke Mt. Edelstone - minty, quite ripe
-2009 Jim Barry 'The Armagh' - oak quite pronounced
- 2013 Brokenwood 'Graveyard' - an element of harshness
-2014 Head 'Blonde' - a bit light

Overall, an impressive showing, with many different expressions of Shiraz. South Australia still dominates.
Posted by Alontin at 2:28 PM No comments: