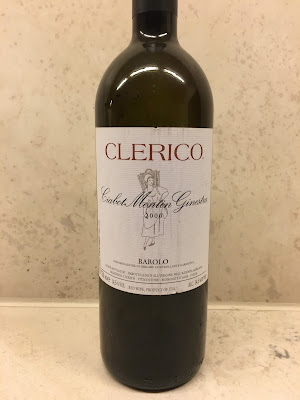 Drinking the 2000 Domenico Clerico Ciabot Barolo is a lesson in cellaring good wine for a long time. I remember tasting this wine from barrel. It was tough. The tannins were harsh, and the wine out of balance. Now, 15 years later, it is a different story. (So much for the saying, what is not great in the beginning will never be great.)

On opening the bottle, a huge aroma of cherries, fragrants and cinnamon arises out of the bottle. Elegant black cherry flavours coat the palate. Savoury elements, earthy and meaty notes add to the complexity. This is a very precise wine, with a finely balanced structure. The tannins are firm, but also silky. The finish is dry, long, powerful and a little dusty.

This wine was clearly built for the long haul. It needed time to integrate and soften. This is true for most outstanding Barolos and also Bordeaux wines. To get the best out of them, you need to be patient.

I have been lucky lately, with another outstanding wine.

I have been thinking that the 1990s are perhaps the golden decade of Penfolds Grange. Why? Since the 1990 Grange, there has been a slight shift to more fruit orientation at the expense of oak. No doubt, this has been a positive. Secondly, during this period, Penfolds has had access to quite a number of outstanding grower vineyards. Subsequently, many have moved to bottle their own wine or shifted, when they came out of contract. Penfolds have since planted the very large Waltons vineyard, but it will take a long time before the vines reach maturity.

The 1991 Penfolds Grange certainly supports my assertion. This is close to a perfect wine, and a fantastic follow-up to the legendary 1990. Cherry and wild berry aromas jump out of the bottle/glass. This is an excellent bottle. I took several Grange bottles to the recent Penfolds re-corking clinic, but not this one. At 25 years, it still had a very high shoulder.

This wine ticks all the right boxes on the palate. Upfront, it is still fresh, with a complex mix of blackberry and plum flavours. Secondary bacon and spice flavours are present as well. The wine delivers a very satisfying, generous and full-bodied mouthfeel on the mid-palate, and is very long and persistent on the finish. The fruit is intense and penetrating, but there is enough acidity to avoid any fruitcake characteristics. The tannins have softened and are quite silky.

Rosés are probably the flavour of the month, but to attend a tasting of 100 odd Rosés is a seriously bewildering affair for a number of reasons. You would never have heard of most producers. Rosé can be based on pretty much any red grape variety (I encountered Black Muscat), although Grenache, Sangiovese and Pinot Noir are most prominent. There are a number of quite different production methods, and maturation can be in tank or oak. All the major wine countries, like France, Spain and Italy produce Rosé, but I will simply highlight three Australian wines which impressed me.

The 2015 Farr Rising Saignée is a 'serious' wine. Based on Pinot Noir, it has quite a dark colour, as the juice had considerable skin contact. Maturation in oak gives this wine a solid tannin structure.

The 2015 Chalmers Rosato from Heathcote is quite a different wine. The family is committed to Italian varieties and different ones go into the Rosato, depending on the vintage. Aglianico, Sagrantino and Negroamaro have been used. The colour of this wine is salmon pink. The wine is bone dry, with chalky notes.

The 2016 Schmölzer & Brown Prêt-a-Rosé from Beechworth has quite a big mouthfeel. This is an up and coming winery and the Rosé is a good example. It is made from Pinot Noir and Sangiovese. The wine is certainly bigger than the Chalmers, with more obvious fruit, but it finishes dry - a happy compromise.

Overall, the fruity wines were in the minority, and the future seems bright. The three wines above should satisfy serious wine drinkers.
Posted by Alontin at 4:31 PM No comments:

Toolangi is not a household name as a leading Australian wine producer. This is perhaps because it has no winery of its own and no cellar door. The focus is on producing great fruit near Dixons Creek in the Yarra Valley and then have leading winemakers make the wine. They have three tiers of Chardonnay and Pinot Noir, and produce a Shiraz. The four top wines coming off their own vineyard are the Estate Chardonnay and Pinot Noir and the Reserve wines, which come from especially designated blocks.

The 2015 Toolangi Estate Chardonnay is made by David Bicknell from Oakridge. Wild yeast fermentation is his trademark. The wine underwent no malolactic fermentation. It spent 8 months in 500 litre pungent barrels, 50% new. Citrus and white peach flavours. The fruit weight is terrific, not too little, not too much. This is a very harmonious wine showing a good dose of minerality. The acidity provides a perfect balance. Drinks well now and will age for 10 years.

The 2012 Toolangi Reserve Block F Chardonnay is made by Rick Kitzbrunner of Giaconda.  Many ask how this came about, as Rick does not make wine for anybody else. When Kitzbrunner started Giaconda, he had no winery to begin with, but Gary Hounsell, the Toolangi owner, had a little facility nearby and allowed Rick to use it. So Rick is now returning the favour. This Chardonnay is a bigger wine, made in the style of a Burgundy Grand Cru. The yield for the grapes is 1t/acre (2t/acre for the Estate wine). After undergoing malolactic fermentation, the wine is matured for two years in barrique, 50% new. This is quite a powerful and rich style, but it is not buttery. Hazelnut and almond flavours add to the complexity of the fruit. The oak adds some spice. Not many Chardonnays are made this way in Australia, but it all hangs together. This wine makes a statement.

This is the second review in the series of reviewing the five Felton Road Pinot Noirs. Today it is the Bannockburn Pinot Noir. This is the highest volume wine in the portfolio, and the only non single vineyard wine. In some cases, one would call this the entry wine, but the quality of this wine exceeds many premium wines. Maybe I could call it the base wine, as it is a blend from the three Felton Road vineyards, the Elms, Calvert and Cornish Point.

Again, I am tasting a wine from the 2009 vintage. In comparison with the Calvert I reviewed before, the 2009 Felton Road Bannockburn Pinot Noir is more open and approachable. The shape is not as focused and pencil sharp. The mouthfeel is rounder. The fruit flavours are not as intense, but the texture of the wine is excellent, with very fine tannins.

The top fruit from these vineyards goes into the single vineyard wines, therefore you expect this wine to be a bit lower in quality. However, a couple of things have happened in recent years. As the vineyards mature, the quality gap between different fruit parcels seems to reduce. And because of the sourcing from different vineyards and soils, the complexity can be quite high. Therefore, on occasions, this wine has recently been rated higher than the more fancied single block wines. This makes the Bannockburn an excellent buy.

The 2005 Henschke Mt Edelstone is quite an extreme wine. This is not surprising. We were entering a drought period, and Robert Parker, whose influence has since waned, was the most important critic at the time. Being from Eden Valley, though, with higher altitude and cooler nights, there is no dead or dried fruit flavours in this wine.

What this wine has, however, is extremely intense fruit flavours, not fruitcake, but just very ripe mulberry fruit. Aniseed is present, as are five spices, and a hint of eucalypt. The wine has a great mouthfeel. The first experience on the palate is sensational, so intense. The structure of the wine holds up and there are even lifted aromas on the long finish.

This is a showy wine, and what happens with showy things, when you look again, it does not create quite the same excitement. The alcohol is rated as an acceptable 14%, and it does not show, but the second glass is harder to drink. Nevertheless, the first one was excellent.

This annual Pinot Noir tasting in Sydney tends to give a good overview of the state of the nation as far as Pinot Noir is concerned. Unfortunately, this year, a number of the big names were missing. Still, when you have the option to taste 150 wines in a couple of hours, I tend to drift to the better known wines, where I can expect good results. I should do it differently next time and seek out the unknowns who's bottles don't even get opened - sad.

There was one wine which stood head and shoulders above the others. This was the 2014 By Farr Farrside Pinot Noir. This is a very complete wine, with dark fruit, very silky, with soft notes, but a firm finish. This is now the best By Farr wine (96 points).

A caveat to these rankings: the tasting was in a crowded room, the glasses were small and there was not much time.

With a couple of exceptions, there were no lolly water Pinot Noirs. These times are thankfully over. Given the line-up, I had expected a few more examples of truly outstanding wines with great personality. Usually, in large tastings like this, I do a taste-off with my three or four favorites. I was not inspired to do that this time. Power in the Pinots has been scaled back, which is a good thing, but now that many winemakers have mastered the art, they seem to go for 'safety first'.
Posted by Alontin at 9:22 AM No comments: