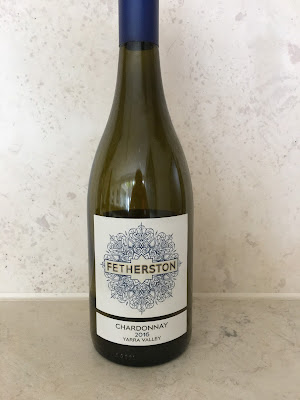 The Fetherston label is a new label to me. This 2016 Fetherston Chardonnay displays quite a golden colour. However, on the palate, the citrus and apple flavours are not very generous and there is a bit of a metallic aftertaste. On the plus side, the structure is good and the acidity level just right. This is an easy drinking quaffer (and a bit more), and it represents excellent value for money.

Posted by Alontin at 6:56 AM No comments: 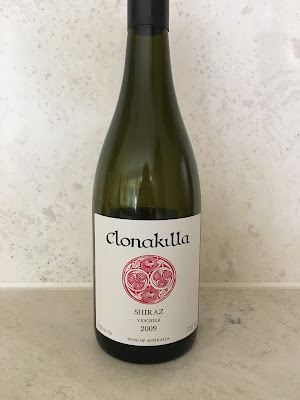 I am not sure what I can add to the glowing reviews for this wine except that this review is now for the nine year old 2009 Clonakilla Shiraz/Viognier. The flavour profile is complex. Blackberry, bramble, blueberry and forest berries are now supported by the development of earthy flavours. The texture is excellent; intense, but not heavy. The lift from the Viognier is there, but not in a significant way and not in isolation. The wine is savoury in character. It is very silky along the palate. This Clonakilla is profound, but also elegant, and with a long finish.

This wine sits between the blockbusters of South Australia and the cool climate wines of Victoria. It is a classic. 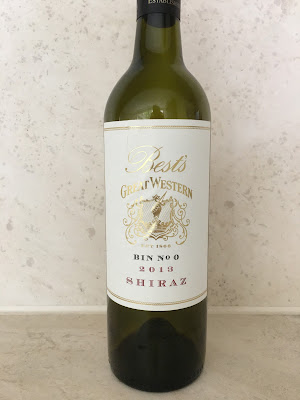 The 2013 Best's Bin 0 Shiraz is a well made wine. It is very balanced, delivers a good mouthfeel, and is fresh on the palate. The fruit flavours are blackberry and eucalypt. Dry tannins lead to a firm finish. This wine will drink well for many years, as older wines have demonstrated.

The problem for me with this wine are the strong mint flavours. I do not think this is attractive in red wine. A hint of it adds complexity, but a heavy dose overwhelms everything else. Therefore the disparity in my score.

Posted by Alontin at 7:53 AM No comments:

The Coldstream Hills Deer Farm Pinot Noir extinguishes itself by the brightness of its fruit. And so it is with the 2015 Coldstream Hills Deer Farm Pinot Noir. The fruit flavours are explosive on the front palate. The red fruit is really delicious, and you do not need to worry too much what happens after. The structure is nice enough, but does not match the early sensations on the palate. The tannins are smooth, but this wine is all about the front palate.

Over the last few days, I had dinner at a restaurant which listed next to the wines the scores of James ' The Pointsmaster' Halliday. All wines had a minimum of 95 points. The wines I tasted were

All these wines were good, but not exceptional, and had some shortcomings. I would rate them 89 to 90 points, with the Paxton at 92 points, and the Drumborg Chardonnay similar as long as it is drunk quite cold. The average Halliday points were 96. He defends his scoring by saying that all Australian wines have improved a lot.

Well, I rate some other wines at 95 points or higher, therefore 5 points or so higher than these wines. This means Halliday would have to rate them at 101 points, which is obviously not the case. This just demonstrates how squashed the ratings in his Compendium have become. As I have said before, the value is in the description, not the point ratings, but in our fast paced world, a simple score dominates, unfortunately.

Posted by Alontin at 5:43 PM No comments:

Felton Road and Kosta Browne are leading Pinot Noir producers in New Zealand and the US. I recently tasted a few of their wines from 2010 and 2011. As not many of you will have access to these wines, I will just make some general comments of my impressions.

The Pinot Noir wines of these producers age well. Primary fruit is still strong after 7 years and the structures are holding up well. However, and this is a big however, it is not obvious that the wines have improved with age. When these wines are young, they are just as attractive to drink; well balanced, great oak integration.

There are many similarities: red and black cherry fruit, not much forest undergrowth character, silky tannins, smooth finish.

The main difference is the fuller mouthfeel of Kosta Browne, but it is not a blockbuster, it is a pleasing sensation. The Felton Road wines are a bit edgier and have more drive. Overall I call it a draw.

Where these leading new world wines are still behind grand cru Burgundy: These French wines show more complexity on the palate after some years and an expanding finish, which is only rarely experienced from new world Pinot Noir.

Another star producer in the making is DuMol from Sonoma. Their estate vineyard has the highest density planting in California. I recently tasted two of their 2014 Pinot Noirs. The Russian River Pinot Noir has a profile of very black fruit, cherry and licorice. It is elegant with good length. The Estate Pinot Noir is similar, with more concentrated fruit. The hallmark of DuMol is the combination of fruit intensity and elegance. This is a producer well worth seeking out.
Posted by Alontin at 9:12 AM No comments:

I am a bit hesitant to put up a review on Bin 389. What can be said that has not already been said about this legendary wine? In contemplating this question, it was clear there is one thing: do not drink this wine too early in its life. I opened a 2006 Penfolds Bin 389 Cabernet Shiraz, and it has just reached its strong drinking window.

The colour is still impenetrably dark. Blackcurrant and plum fruit deliver a sweet core, but not in an extreme way. The two grape varieties are seamlessly integrated, as is the oak (old Grange barrels). Dark chocolate and soft beef flavours add to the complexity. The overall impact is a beautifully rounded mouthfeel with mellowed tannins, which still have a firm grip on the wine's structure. This is a top wine from a not so highly regarded vintage.