Hickinbotham is the neighbour of Yangarra Estate, both owned by the Jackson Family of America. The Hickinbotham vineyard, planted in 1971, is situated in Clarendon and, I have no doubt, will become one of Australia's legendary vineyards over time. It is large, and the hilly area allows the growing of vines in all directions. Previously, grapes were supplied to Penfolds and Clarendon Hills. The original intent was to make wine for the US market, but the majority is now sold in Australia. The main focus is on Cabernet Sauvignon and Shiraz, in contrast to Yangarra, where Grenache plays a major role. 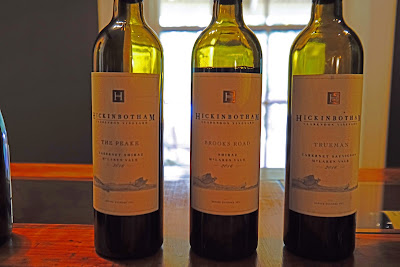 I tasted the three key wines from the 2016 vintage. The 2016 Brooks Road Shiraz is denser and more compact than the Yangarra King's Wood. Blackberry and blueberry flavours blend in with clove and mocha. The complex flavours are surrounded by firm, yet elegant tannins (94 points).

The 2016 Trueman Cabernet Sauvignon delivers very pure blackcurrant flavours; black cherry as well. The texture of this wine is very smooth, and the wine delivers an elegant mouthfeel. Overall, I find the wine a little bit inky (93 points).

Interestingly, the best grapes are saved for the Cabernet/Shiraz, continuing an old Australian tradition. The 2016 The Peake Cabernet/Shiraz is not named after the peak of a hill, but after Edward Peake, who developed the vineyard first in the 1850s. The blend is 57% Cabernet Sauvignon and 43% Shiraz. This wine is very elegant with great depth of blackberry and raspberry flavours. It is a tighter wine than the Brooks Road: the amazing length beats the generous mouthfeel in the end (96 points).

These three wines were impressive, largely for their pure varietal character and how they marry elegance with depth of flavour. These are great examples of how I think full-bodied Australian wine should taste.