Hawke's Bay is the oldest NZ wine region, yet it is not nearly as prominent as Central Otago, Marlborough or Martinborough. A recent tasting of some of its best wines demonstrated that it deserves much better. The region is best known for Chardonnay, Syrah, and Cabernet blends. The wines tasted are shown in the picture below. 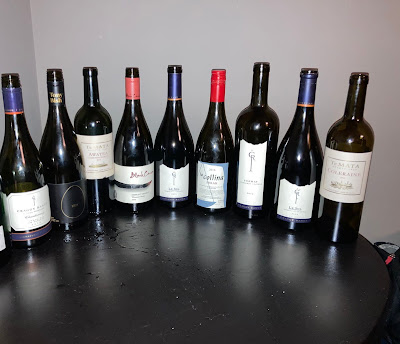 The top three wines, in my and the other tasters opinion, were the 2010 Craggy Range 'Le Sol', the sensational 2018 Tony Bish Zen Chardonnay, and the 2014 Craggy Range 'Sophia'.
The Tony Bish Zen is unusual in that it is matured in a French oak egg, or Ovum. This gives quite a lot of oak exposure. Not surprisingly, therefore, is the golden colour and the fuller bodied flavour of this wine. There was depth in the yellow peach fruit, and complex nutty flavours added to the rich texture. At the same time, there was a lightness on the finish - intriguing (96 points).
Le Sol is arguably the most credentialed Syrah from New Zealand.This 2010 Le Sol showed very layered red and black fruit flavours and was more generous than the other very peppery Syrahs (see below). This is a very balanced wine with a sweet core, and overall quite a big mouthfeel (96 points).
I reported on the Sophia a few posts back, so no notes here.
I rated the next set of wines all 94 points. The 2017 Blanc Canvas 'Element' Syrah is properly named. The elements must have rattled the vines a lot. This is probably the most peppery wine I have ever tasted. The cracked black pepper was so strong, it overshadowed everything else. It is a medium weight wine with dark fruit and bacon flavours and quite a tannic finish. It gets this good rating for personality.
The 2016 Bilancia La Collina Syrah, with part fruit coming from the Gimblett Gravels, and part from south of Hastings, is also quite peppery. This is a more balanced and elegant wine, partly due to the 2% Viognier. The musky notes are interesting; the finish is long.
The second Craggy Range 'Le Sol' was from 2014. The colour was very inky. This wine was quite closed, may have entered a dormant phase. It had a slightly eucalypt character, with peppery flavours and licorice also present.
Finally, the 2019 Te Mata Coleraine. Cassis was dominant, and we felt the wine had a bit of a vegetal character. The highlight were the very fine and dusty tannins. This wine had outstanding reviews by a number of professional reviewers. At this tasting, it suffered a bit from being last and a bit rushed. It was also quite young by comparison. But 100 points? No, it is not a perfect wine.
The final two wines were the 2014 Te Mata Awatea, Coleraine's little brother. It is a lighter wine, with mint and peppery notes and a bit of a gap on the mid palate. It was quite enjoyable, but was put up against outstanding opposition (93 points).
The first wine was the 2019 Craggy Range Kidnappers Vineyard Chardonnay. It comes from a coastal site. The nose was quite floral, and we were in fact not sure if we were looking at a Chardonnay here (all wines were tasted blind). The wine was quite light on the palate, with an attractive texture - a flinty wine with melon flavours and saline notes (92 points).
Posted by Alontin at 10:47 AM