Today, Rioja is the most exciting of the traditional wine regions in the world. Why? A lot is going on. In the past, almost all wines were blended, but today, a number of single vineyard wines with a terroir focus have sprung up. Traditionally, wines were matured for long periods in oak, often more than five years. Strict regulations supported this approach. Oaky flavours were the hallmark of Rioja wines. Today, a number of wineries emphasize the Tempranillo fruit. The scene reminds me of Piedmont in the 1990s, with traditionalists and modernists fighting it out.

I visited Rioja a bit over a year ago and had planned to publish an article about it, but the wine magazine I used to write for had difficulties, and it never happened. I just came across my notes, and will now write this up here. The blog will have less wine specific tasting notes than normal, as the tastings took place more than 12 months ago, but there will be some.

The geography of Rioja is quite fascinating. On the one hand, warm winds are funneled up north from the Mediterranean, moving from Zaragoza into Rioja. On the other hand, cold winds from the Atlantic hit the Basque mountain range and descend into Rioja. Near Bilbao is a gap in the mountains which delivers wind and rain. 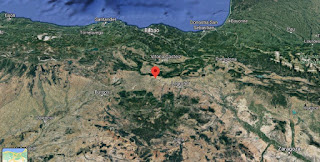 The red dot is Haro, the centre of Rioja
There are three subregions, Rioja Alta, Rioja Alavesa and Rioja Oriental (Baja). Most premium wines come from the hillier Rioja Alta and Rioja Alavesa. The latter is particularly interesting, as vineyards are found on the southern slopes of the Basque mountain range, thereby avoiding the rains from the North. The diurnal range is quite high here. 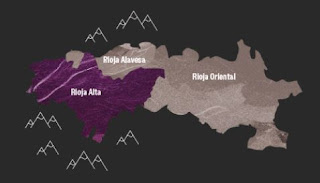 My story and the story of modern Rioja begins in Haro. When phylloxera devastated the Bordeaux vineyards in the 19th century, the merchants of Bordeaux looked for new supplies they could ship to wine hungry London. Rioja was close and Haro had a train station with tracks to France. Wineries established themselves near the station. They grew dramatically in size. Today, the large Rioja wineries are still based here. In fact, Haro has the largest amount of oak barrels per square kilometre in the world.
Individual wineries will be reviewed in part 2.
Posted by Alontin at 6:08 PM