Lucien Le Moine is a small negociant in Burgundy, yet he releases over 50 1er Cru and Grand Cru each year. I had a rare opportunity to taste 11 of them from the 2016 vintage.


There are a number of things which set Lucien Le Moine apart from most other Burgundy producers; most significantly his long élevage period of 18-24 months. He lets the wine sit on lees and does no racking. With this method, he requires no sulphur. All wines undergo malolactic fermentation and are aged in 90-100% new oak of low toast.

The first bracket of four wines are Chardonnays from Chassagne-Montrachet and Meursault. The quality of these wines is very high. Apart from the first wine, I rate them 94-95 points. Charmes was my favorite from this bracket. As expected from a 1er cru of Meursault, this is quite an opulent wine, but it is elegant as well, with good drive. The Chassagne-Montrachet wines and the Porusot are leaner, showing attractive minerality. 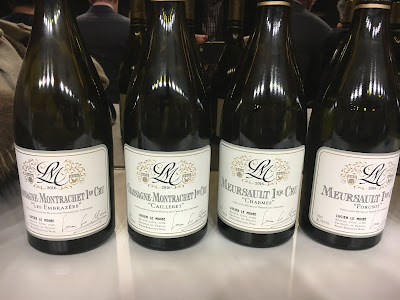 In the first red bracket, there is a difference between the first two wines, and the next two. The first two wines are a little lean, reflecting the cooler condition of the 2016 vintage, with acidity being a strong feature. The Les Cazetiers is a complex wine from almost 100 year old vines. It is expressive , with spiciness and earthy flavours, and a long finish (94 points). The first Grand Cru from Latricières is even more elegant, with silky tannins (95 points). 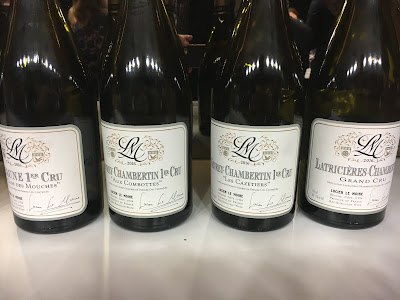 The two Grand Crus in the last bracket really shine. Clos de Vougeot is the largest Grand Cru in the Côte-de-Nuits and can be quite variable. Lucien Le Moine has access to fruit from the lower, middle, and upper part in order to achieve a balance between the different influences of fruit weight and elegance. The 2016 wine has good depth of fruit, silky tannins and a long lasting finish (96 points). The top wine is the Bonnes Mares Grand Cru. A similar profile to the Clos de Vougeot, it has additional smoothness, and therefore an outstanding texture. This wine has been described as the signature wine of Lucien Le Moine, but you have to pay about $A800/bottle for it (97 points). The Feusselottes was sandwiched between these two, and could not match them in fruit depth and mouthfeel. 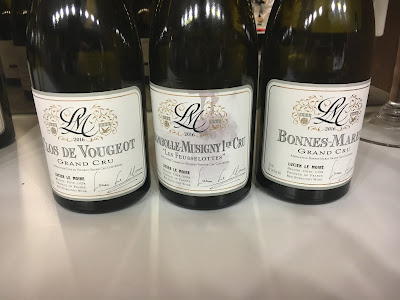