It was always clear that David Powell would not disappear from the scene after he lost control of Torbreck. While the 2014 wines of his new venture with his son Callum were a bit uneven, I am pleased to be able to report that the 2015 and 2016 red wines are very strong indeed. This tasting came just after the release of the Wine Spectator Top 100 for the year, where his US entry wine was one of five Australian wines or so to feature. 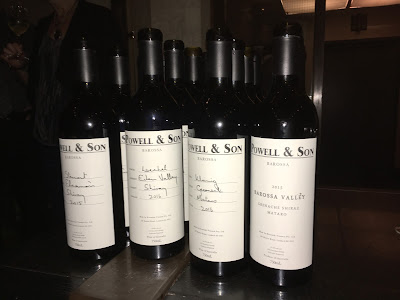 The 2015 Powell & Son Grenache Blend is very similar to Torbreck's Steading, which was always Powell's favorite wine. Grenache dominates in this GSM. Raspberry, strawberry and cherry fruit engulf the palate with fresh flavours. The components are seemless, and the wine finishes with soft tannins (93 points).

The 2016 Mataro 'Kleinig' for me was the highlight of the tasting. This is because this wine has a very distinct personality. Again, there is a Torbreck analog, the Pict. Fruit is not the key to this wine. This wine is rustic, spicy, meaty and with great weight on the palate. The image I had was to sit on an old, rusty truck driving over a potholed dirt road (95 points).

The 2016 Shiraz 'Loechel' consists of the Eden Valley component of the Torbreck Struie. The vineyard is near the Eden Valley township. From a more balanced vintage than the warm 2015, this wine is fresh and lively. There is the typical Eden Valley spice and the mouthfeel is very satisfying (95 points).

The 2015 Shiraz 'Steinert' comes from an Eden Valley vineyard at Flaxman's Valley, at an altitude of 480m. David Powell believes this to be an amazing wine, and it is certainly priced that way. There is blackberry and blueberry on the palate. The flavour is weighty and juicy. I find the wine a bit big and fat, but it has a lot of depth. Alcohol is noticeable on the finish (92 points).

Overall, the wines are seductive and quite delicious. David Powell is back.

PS: Callum has just had his last exam in Oenology. Let's see what influence he will have in the future.
Posted by Alontin at 7:40 AM