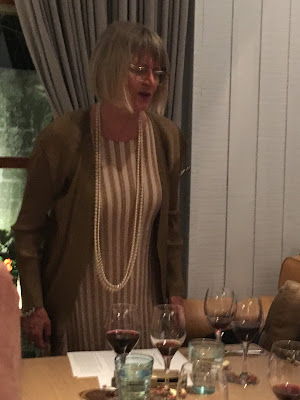 At this dinner a couple of days ago, Mrs. Robinson showed eight wines from grape varieties not grown in Australia. The wines were from Portugal, Italy, Spain, Greece and Switzerland. Given her reputation and access to wine, I had expected quite sensational wines, but these were mostly quite modestly priced wines. Well, she has reviewed wines sold by Tesco. Any real discoveries or bargains here?

I found six of the eight wines quite unspectacular, and as they are real rarities, it is not worth while to mention them here. Two wines, both white, were interesting, however. The first was from the isle of Crete, a 2016 Lyrarakis Dafni. Jancis mentioned that this wine had one of the most distinctive aromas she has ever encountered. I had to agree. It had a strong smell of fennel and herbs, which continued on the palate. It would go really well with Chinese food. Not an outstanding, but very interesting wine (89 points).

The wine of the night was the 2015 Rafael Palacios As Sortes Godello from Galicia, Northern Spain. Godello is gaining some interest, but many wines are quite ordinary and industrial. This wine was top notch. It had great fruit weight, but a certain flintiness as well. I tasted citrus, grapefruit and white peach. This was perfectly balanced by fine acidity (94 points). Apparently it is as rare as hen's teeth.

It was an interesting evening topped by a story about wine tasting at the Palace with the Queen (she is an adviser), which we promised not to share - sorry.