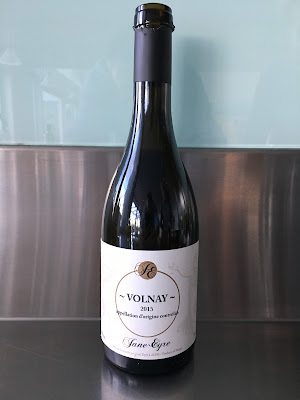 Jane Eyre, an Australian winemaker, has been working in Burgundy since 2004 - mostly as assistant winemaker at Domaine Newman, but increasingly also building her own portfolio of wines. Low yielding fruit, minimum intervention, and the use of one and two year old oak characterizes her approach.

This 2015 Jane Eyre Volnay bottle, which is quite heavy, by the way, did not fit where I wanted to store it, so I decided to open it last night. This turned out to be a mistake. Despite decanting, the wine was very closed. It clearly has entered its dormant stage. It tasted more like a dry red than a Pinot Noir. Unusual for Pinot Noir, the fruit, such as it was detectable, tasted of raspberry. The structure and balance of the wine is good, and after a while, the fruit flavours opened up a little. Some depth was coming through, but the wine lacked the generosity associated with the 2015 vintage. There was good length on the palate, before the lean finish. It would not be fair to score the wine based on this tasting. I highly recommend not to open this wine for another three years.

By the way, if you want to learn more about the 2015 Burgundy vintage, you can read my article 'Touring Burgundy' in the Gourmet Traveller Wine (for Australian readers) in the October/November edition.