I need to do a bit of cross-promotion. My book 'Barossa Shiraz' was recently reviewed on a well respected French blog at http://vinosolex.com/barossa-shiraz. Below are brief reviews from Max Allan in The Australian and Huon Hooke in the Sydney Morning Herald.

.Barossa Shiraz – a fascinating look at Australia
By Lincoln on January 22, 2014

Barossa Shiraz was released while I was Down Under last year. It’s a fascinating book for many reasons.

Originally from Germany, Thomas Girgensohn became a businessman and consultant in Australia, and a keen wine collector. I suspect that by straddling the Old world and the New, he has gained valuable insights into these two very different approaches to life.

The book is a compelling argument for the view that terroir affects the taste of wine. Indeed, this is the most startling aspect of the book from over here; that anyone has to argue these points at all. No one in Europe doubts that place affects the taste of wine (and for that matter cheese, meat, fruit, walnuts…) and that you can either allow your wine to express its source, or you can screw around with it to push it towards something abstract called “the market”.

Girgensohn defines terroir as “the sum total of environmental factors influencing the growth of the grapevine and grapes”. The definition in France tends to be wider, and includes historical and cultural dimensions; the “human factor”. Naturally this issue is discussed incessantly, and usually leads to a distinction being made between (1) wines from a particular terroir and (2) vins de terroir (terroir wines). The first is a wine from a place with characteristic taste profiles, but without necessarily reflecting that terroir. It may be made in such a way that the “inherent” taste is masked. This type of wine, where the maker has intervened to affect the taste, is often called a “vin d’effort” (effort-driven). A vin de terroir, though, expresses that terroir. The leitmotif here is “minimum intervention”. Girgensohn clearly acknowledges the importance of this human factor without building it into his definition.

And this is another enthralling aspect of the book. This new approach in the Barossa is a sign of a radical change in Australian thinking. In Old Europe, humans belong to the land. They have a duty to their country, through which they are merely passing. This is the peasant approach, and it is constantly affirmed when I visit France on Solex.  Australia, on the other hand, was settled by a brutal culture at a particularly brutal time, and it is only normal that the newcomers failed absolutely to understand such a subtle land, and saw it as theirs to exploit as a resource. Even if French terroirists may hardly sound modest when they defend terroir, humility and patience are at the core of the notion.


Some Barossa VinoSolex friends – pics by VinoSolex. All are profiled in the book.

This Aussie attitude change may also herald a new approach to risk. Making vins de terroir is inherently more risky than pounding out brands. For a start, you don’t get the volume the outlets may want. You are also much more likely to be organic or biodynamic, with all of the challenges this brings. And your wine will reflect the conditions of the year, so it is less consistent; a headache for the marketers. A bit more tolerance for risk would be refreshing Down Under, which over several decades seems to have conceded far too much to the litigation lawyers.

A solid section in the book on the Barossa’s history shows how it has driven the overpowering commercialism of the last few decades, while preparing the valley for these new changes. Girgensohn has added delightful profiles of the three generations of “Barossa characters” who have taken the terroir approach, including several Friends of VinoSolex: Prue and Stephen Henschke, David Powell and Charlie Melton.

Girgensohn concedes that this book is only a start, one which will inspire debate and research that will be fed into the next addition. I look forward to that immensely. 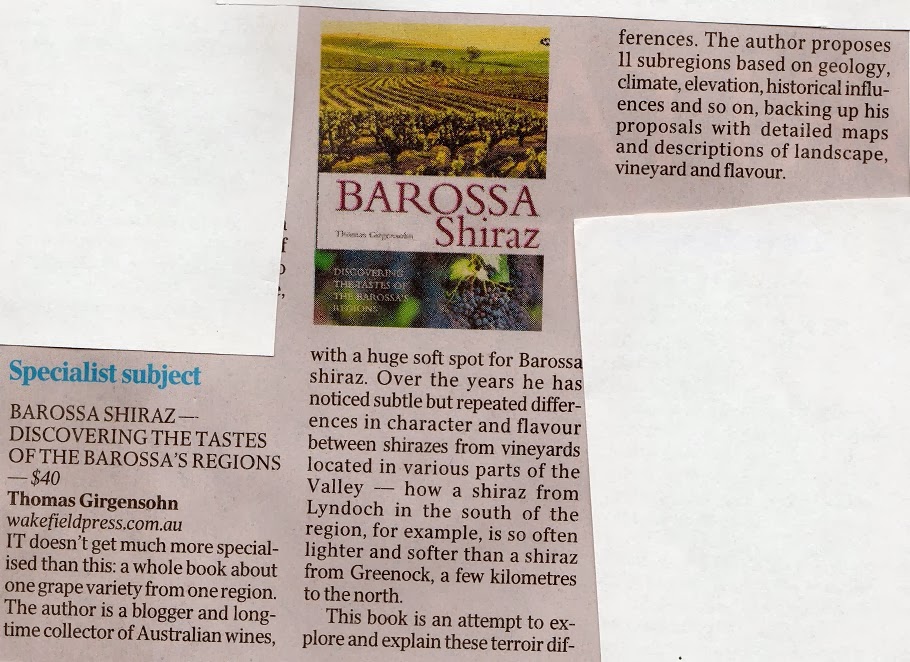 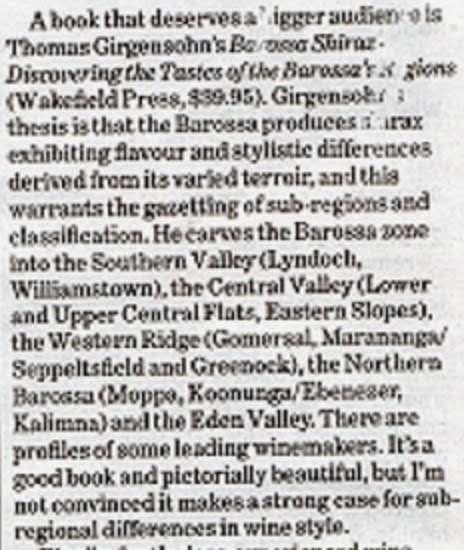