Ruggabellus was one of the first new wineries in the Barossa in the 'post-Parker' world where deliciousness and vitality became the buzz words. This meant  earlier picking and in Ruggabellus' case, wholebunch. The fact that Abel Gibson's approach was not initially approved by his father, Rob Gibson, the 'dirtman' and grape grader for Penfolds, added to the buzz. The initial concept was simple, but intriguing. Make the southern Rhone blends, make three different wines, where the lead changes from Shiraz to Grenache to Mataro. Interestingly, it seems that in current years, there is a move to 100% Shiraz again, as there is with his spiritual father, Peter Schell at Spinifex.

I recently tasted two wines from the different times, the 2013 Ruggabellus Timeus, a Mataro dominated wine, and the 2018 Ruggabellus Archaeus, a 100% Shiraz. 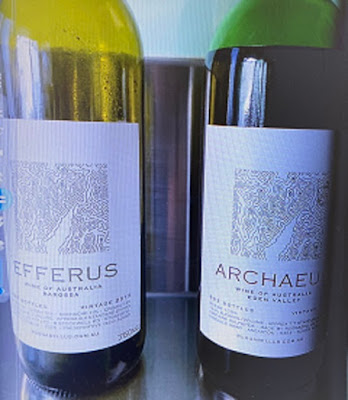 Sorry about the poor quality, could not fix a problem
The Efferus tastes of blackberry and raspberry. It is a seamless wine, smooth and elegant, quite soft (wholebunch?). A feature are the velvety, long grained tannins. The wine finishes slightly hot, although alcohol is lower than typical for the Barossa.
Score: 94/++
The Archaeus is a lifted Shiraz. Blackberry, forest berries and red plum deliver a satisfying fruit profile. This is an energetic wine, but the mouthfeel was not totally round. I found the wine slightly rough on opening, but much better on day 2 and day 3. Still, it was dropping off at the finish. This wine is clearly too early to drink.
Score: 92/+