My first stop in Haro was at Rioja Alta. This winery was established in 1890 to fulfill the requirements of Bordeaux merchants. There is a lot of tradition here, but also modernity, demonstrated, as an example, by this flashy showroom. 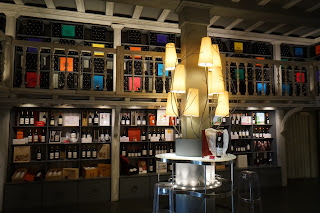 Spanish inheritance law means that fortunes have to be divided equally between children. Wine growing has been going on in this region for close to a thousand years. As a result, individual vineyards are small. Rioja Alta had to source grapes from many vineyards to meet the thirst of the Bordeaux merchants. It was obvious that wines had to be blends from many vineyards, 150 today. Rioja Alta controls over 550ha in Rioja.
The second key aspect is oak. Rioja Alta owns more than 20,000 barrels to accommodate long ageing processes. This is simply astonishing and mind blowing. 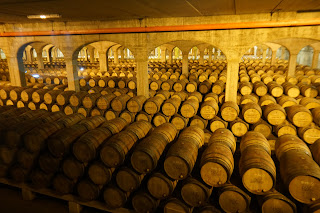 It is not surprising then that Rioja Alta has its own cooperage, which forms the American oak to its specifications.
I tasted the classic range with the winemaker. 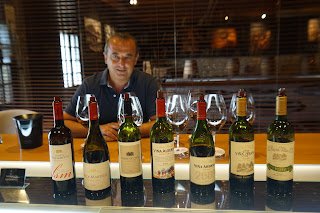 Torre de Oña on the left, Rioja Alta on the right
The best wines are the Ardanza Reserva, an 80/20 Tempranillo/Granacha blend, which is quite powerful and spicy; the Arana Gran Reserva 2012, a 95/5 Tempranillo/Graciano blend, which is still fresh and elegant, with good complexity and a long finish; and the 2010 Gran Reserva 904, first made in 1904. This is a 90/10 Tempranillo/Graciano blend. The wine spends four years in barrel and three years in bottle before release. It is a mature wine, but the fruit is still good with a serious expression of minerality in the wine.
In 1995, the company bought a winery in Rioja Altavesa, Torre de Oña. The vineyards sit at an altitude of 600m and are grouped around the Bodega. There is an opportunity to produce single vineyard wines here, but at present, the three wines are picked from different plots and made in the Crianza or Reserva style.
Rioja Alta is a traditional winery in that its key wines are Reservas following the regulatory regime of maturation. At the same time, it has a strong quality focus, for example 13% of grapes are discarded from the sorting tables. Modern techniques are employed, such as gravity principles, and an innovative racking system.
My second stop is Roda, just across the road. There are differences here. This winery is much smaller than Rioja Alta, and only 30 years old. It uses only grapes from bush wines, and everything is matured in French oak. Roda makes about 10,000 cases per year. 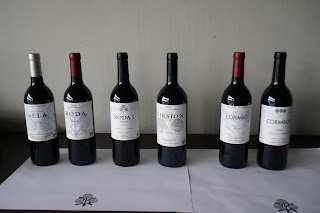 Roda on the left, Corimbo (Ribera del Duero) on the right
The first wine is the 2016 Sela, a blend of 87% Tempranillo, 7% Graciano, 6% Granacha. The wine comes from 15 to 30 year old vines, and is matured in larger, used French oak. This wine is all about fruit and freshness. It is elegant with silky tannins, made in the Crianza style.
Roda is made with a focus on red fruit, it is floral and fresh, a similar blend to the Sela, but with more fruit weight. It is influenced by the Mediterranean climate. In contrast, the Roda I is black fruited, and more influenced by the cooler Atlantic climate. I tasted the 2013. I was impressed with the complex profile of black fruit, spices, licorice, and how these long flavours came together.
The Cirsion is the flagship wine, made from the oldest parcels, only 400-600 cases per year. It is aged in 100% new oak, but only for 8 months. Roda does not want the oak to take over. It is like a best barrel approach. The 2016 is a dark, brooding wine, big volume with smoky and earthy elements. At 150 Euro, it is not cheap.
Roda does not use the Crianza and Reserva descriptions. There is definitely an emphasis on fruit here, as opposed to oak, and the Cirsion is certainly not traditional.
To be continued...