Are you serious, I hear you say. Well, this question arose in my mind after a tasting of high quality wines of less prominent grape varieties recently.

The most famous regions in France do not feature grape varieties. The argument there is between terroir and producers. Burgundy features terroir, but there is no doubt, producers make a difference. The famous example is the vineyard of Clos de Vougeot, where different producers produce wines of vastly different quality. In Bordeaux, the chateau reigns supreme, but are the differences between Mouton and Lafite all due to winemaking? In any case, grape varieties may not feature, because it is well known that red wine in Burgundy means Pinot Noir, and on the left bank of Bordeaux it is a Cabernet Sauvignon dominant blend, while on the right bank it is Merlot led.

Two varieties which were presented at this tasting were Malbec and Blaufraenkisch. The Malbec I want to talk about here was the 2016 Cloudburst Malbec from Margaret River. 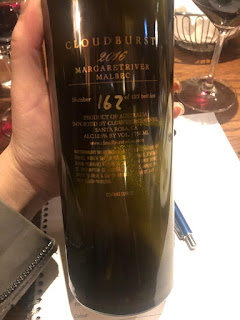 This wine tasted like no Argentinian or French Malbec. The fruit profile went the gamut from red over blue to black, and the tannins were powdery and silky. The vineyard sits between forest and ocean and the soil has never seen any pesticides or chemicals in thousands of years. The vineyard is densely planted like no other Malbec vineyard. Was I drinking Malbec or a particular viticulture?
Intriguing was the tasting of three Blaufraenkisch wines from Austria. Two were from Moric Lutzmannsburg, 2013 and 2007, one the 2014 Gut Oggau Joschuari. 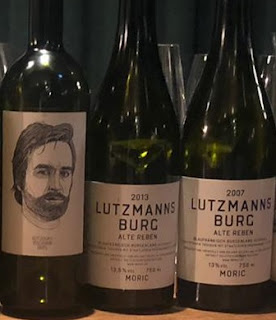 My expectation of Blaufraenkisch has been: fruit dominant, easy drinking, a quaffer. This was totally different. The Lutzmannsburg wines showed beautiful perfumed aromas and finesse. The young one tasted like a premier cru Gammay, the older one showed Piedmont like aromas. This tasted of terroir, not the grape.
The Joschuari is an alternative wine, biodynamic, no fining, no filtering, no sulphur. Here the winemaking 'made' the wine not the grape.
Does this mean the grape variety is irrelevant, no, of course not. But it shows that with special attention and skill, the terroir can define a wine, no matter what the grape, and equally winemaking can define a wine, no matter what grape.
Posted by Alontin at 9:52 PM