There is no denying that there is a trend towards lighter style red wines. Many Shiraz and Cabernet producers try to accommodate this by picking earlier, reducing extraction and using less new oak. Nevertheless, 'lighter' styles are gaining share. The first wave was Pinot Noir. The second wave is Rosé or Rosado or Rosato. The third wave is more subtle, but gaining traction. It is Beaujolais.

The current Beaujolais story is a little complicated. Beaujolais is made from Gamay, a variety which is associated with fruity and easy drinking styles. Beaujolais Nouveau, released in the same year as harvested, was a big marketing success a few decades ago, but is not regarded as a serious wine by passionate wine drinkers.

However, the Beaujolais region has also created 10 cru areas, similar to the system in Burgundy. In contrast, they relate to entire village areas here rather than single vineyards as in Burgundy. If you want to get away from Beaujolais Nouveau as far as possible, you look for the 'M' villages, Morgon and Moulin-à-Vent. Wines from here tend to be darker and more tannic than the other areas. Today, I am reviewing two wines from Morgon. 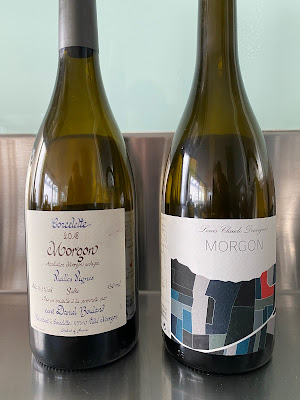 On the left, is the 2018 Daniel Bouland Corcelette Vielles Vignes. This wine comes from 90 year old vines grown on sandy soils. As such, this is a pretty and charming wine. The red berry flavour is fruity, yet dry, and fills the mouth in a pleasant and satisfying way. The tannins are soft and silky. The acidity provides some grit. This wine is elegant, of medium depth and length.
Score: 92/++
Domaines Louis Claude Desvignes produces a wine from Corcelette as well, but this wine is the 2018 Louis Claude Desvignes Montpelain. The vines are 80 years old, and the soil is small rocks in clay. The different soil type has a major influence on the wine. This wine is darker fruited and richer in the mouth with more fruit weight. Some savoury and earthy elements add to complexity. The tannins are more muscular than in the Daniel Bouland. This is a more generous and bigger wine than many Pinot Noirs. It does not quite have the nuances or drive of a good Burgundy, but is elegant and pleasant to drink.
Score: 92/++
Posted by Alontin at 4:35 PM