Quite a few films with wine as a main topic have been made over the last ten years or so. It is a difficult proposition. If the film gets too specific, it looses its broad appeal. As a result, most films have been comedies with very little serious wine content. One film which had wider appeal despite being clearly about wine was 'Red Obsession', but otherwise?

Now I have come across and read a book which is a thriller with wine as a main topic. Somebody is poisoning vineyards with a new type of phylloxera. American rootstocks are not resistant to this new 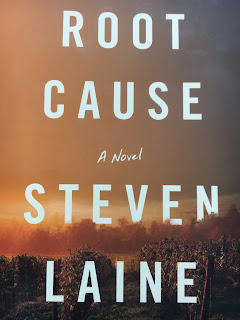 pest. A chase around the world ensues to hunt the culprit(s) down, as the catastrophe develops rapidly from vineyard to vineyard. The story has enough twists to keep the reader interested, and the book finds a great balance between general plot development and some interesting details about the wine world. I learnt something new about Champagne cellar tunnels  (even though I have been there), as an example. It is obvious that the author has a good understanding of wine and knows the regions featured in the book, which are many.

This book is easy to read, but not silly. It is entertaining, a bit educational, and turns into a page-turner in the second half. Minor annoyances, such as an obsession with scarfs and an overly simplistic 'Alison' character do not detract from this worth while entertainment for the wine enthusiast. I recommend this book, published this year.