2008 was a year still in drought, after the very dry 2007 in the Barossa. It is said that Hill of Grace comes into its own after 10 years, but should I be worried, given this could be quite a ripe wine? But then I took confidence from the very old vines. They are so old because they have survived harsh conditions before. 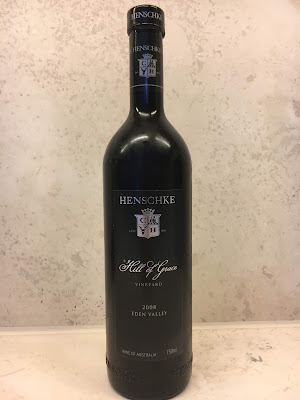 When I opened the wine, I got a little bit worried, though. The dark violet colour was tinged with orange/brown. This would be interesting. I need not have been concerned. On the palate, the wine delivered its typical flavours: dark plum, kirsch, aniseed and five spice. There is no other wine in Australia which expresses the terroir as distinctly as Hill of Grace. Oak was noticeable in a support role, and the tannins were incredibly smooth and silky.

The mouthfeel of this wine was quite big, but very layered. The beautiful texture was well balanced with savoury notes. The flavours went on and on at the back of the palate and on the finish; beautiful.

This is a 10-20 year wine, not a Grange 30-50 year stayer, but it delivers everything it needs to deliver now.