It is not often you have an opportunity to taste Chinese wine in the west. Yet, China is the sixth largest producer of wine in the world. Production has been pushed very hard, in particular in the western Xinjiang province. There is now a surplus of Chinese wine, as consumption is still focused on the major cities, where the wealthy prefer imported wine, anyway. And these companies are not well equipped to export their product either.

Broadly speaking, there are three major regions. The coastal region, where vine growing has been going on for a long time, the middle region, and Xinjiang in the west. While the focus is on Xinjiang, conditions are difficult there. The winters are very cold, and the vines need to be buried. This is very labour intensive. 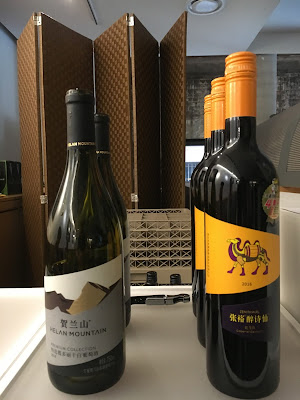 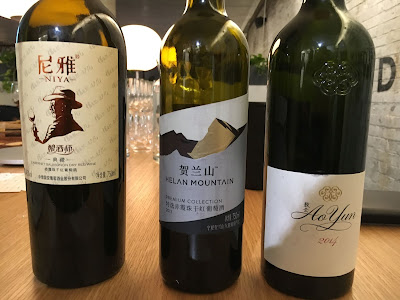 I tasted five wines. The 2014 Helan Mountain Chardonnay is from the middle region. It was well made (by Pernod Ricard), but I found the wine a bit sweet (85 points).

Next was the 2016 Zenithwirl Cabernet Gernischt by the Changyu Pioneer Wine Company. Cabernet Gernischt is a Chinese variety which was introduced to China in 1892 by Changyu. It was the European grape Cabernet Gemischt (meaning 'mixed'), now extinct there. It has been shown recently that this variety is identical to Carménère. This was an earthy wine, a little plump (84 points).

I then tasted the premium bracket. The 2016 Niya Xinjiang 'Manas' Cabernet Sauvignon was quite fruity, featuring red berry fruit, including some raspberry fruit. I did not find this very varietal (82 points).

The 2015 Helan Mountain Premium Cabernet Sauvignon was a much better wine. Darker fruited, with oak and date flavours, this is quite a soft wine, with earthy undertones (88 points).

The best wine was the 2014 Áo Yun' Cabernet Sauvignon/Cabernet Franc, made by Moet Hennessey. This wine is from the very humid Yunnan region, bordering on Laos and Myanmar. This is a classy wine, red fruited, with a good tannin profile. This medium-bodied wine is still quite tight, but an elegant drink with a balanced structure (93 points). It was performing better than the A$200 2013 Taylors Visionary Cabernet Sauvignon bottle, which it was paired against.

I don't normally talk about pricing, but it is interesting here. The main task for China consumer goods is to establish a brand, the product comes a distant second. So you find the Zenithwirl priced at A$100-120 per bottle. The winemaker is French. The better performing Helan Mountain is only $15-20 per bottle. And finally, the Ao Yun is China's most expensive wine, at a whopping A$500 per bottle, positioned like that by Moet Hennessey.
Posted by Alontin at 11:34 AM