The third day became the highlight, not so much because of the visit to the Robert Mondavi winery, but for the other heavyweights. The tour at Mondavi was interesting, but the wines very ordinary. It seems the focus is on volume now, not quality.
The second stop was the Napa Wine Company. There are a number of tasting rooms which showcase smaller wineries, and this is one of the best (Ma(i)sonry is another one well worth a visit). This is in fact a contract winemaker, where you can taste all the wine he makes. Their own label is Blackbird, and the 2007 Ghost Block SV is an excellent Cabernet. It has beautiful cherry fruit, very elegant, and nicely integrated soft tannins (94 points).
I also tasted the range of the Pahlmeyer wines, one of the best family wine companies in the valley. Their 2006 Pinot Noir was a lighter style, but lush and velvety (94 points). The 2006 Cabernet (includes 18% Merlot) tasted of black- and redcurrant and had depth and an elegant structure (95 points). The Pahlmeyer wines are beautifully crafted.
The first absolute highlight was the tasting at Stag's Leap Wine Cellars (see picture below left). This is one of the American companies which beat the French in the famous 1976 tasting. I managed to taste the three top wines from the hyped-up 2007 vintage, which are all rated in the top 50 American Cabernets. The Fay tasted of sweet cherry, with earthy undertones and dry tannins. It most the most approachable of the three (93 points). The SLV comes from the next block, but with different, more volcanic soil. Its colour was deep, and the blackcurrant flavours dominated. There was also a lot of smoked bacon on the palate. The wine was very complex and powerful, with great depth and a lengthy finish - almost the wine of the tastings (96 points). The Cask 23 is their flagship wine, a best barrels blend of the two vineyards. It tasted of black- and blueberry and was softer and more elegant than the SLV. The wine was not as big and I felt it had a hole on the mid-palate (94 points).
The other highlight was the short tasting at Joseph Phelps. The only American Cabernet I currently have in my cellar is their 1997 Insignia, an excellent wine. The Insignia, their flagship wine, is a blend from six different Napa vineyards. They had just released the 2007 to great acclaim, and I could taste it next to the 2006 (picture below right). The 2006 is 95% Cabernet and 5% Petit Verdot, which contributes to the very inky colour. It tastes of red- and blackcurrant with good length and soft, dry tannins. I just felt it lacked a bit of mouthfeel (94 points). The 2007 is 88% Cabernet, 8% Merlot and 4% Petit Verdot. It tasted very complex, with black cherry and meaty flavours dominating. The wine is very elegant, with great integration of flavours and structure, and it has a very long finish - my wine of the tastings (97 points). Joseph Phelps is clearly back to their very best and remains probably my favorite Napa winery, for consistency of very high performance and for wines which are not overblown and can go the distance. 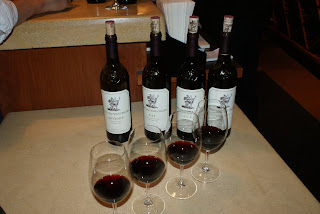 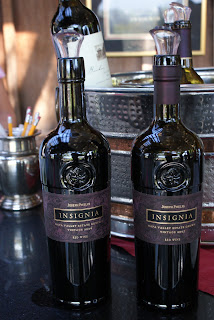