The home of the Assyrtiko grape is the Greek island of Santorini. Santorini is basically a large caldera formed from a relatively recent volcanic eruption. The soil is volcanic, and the wines' strong characteristics are acidity and minerality. It is quite brave to assume this would go well in the Clare Valley. But this is what Jim Barry has done after having to take the variety through years of quarantine - and in search of varieties suited to ever increasing temperatures. 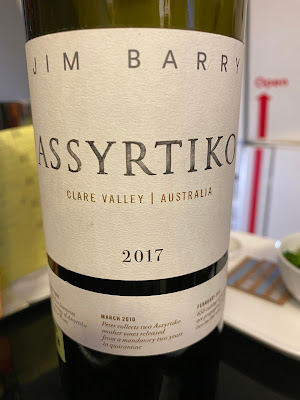 The 2017 Jim Barry Assyrtiko is good, but it is not the same as the Greek versions. It displays citrus character, a bit like Chablis, but broader on the palate.The acidity is not as pronounced, nor is the minerality. The wine is a bit middle of the road, but Rome was not invented in a day, either. This is an early effort and the wine shows potential to excite some more in the future.