Chester Osborne is a man of wild phantasies. Some of these have been incorporated in the Cube, one of the most innovative wine tasting buildings I have encountered. It has certainly been the talk of McLaren Vale, if not Australia in the last couple of years. Fittingly, as I visited, it also housed a Salvador Dali sculpture exhibition. 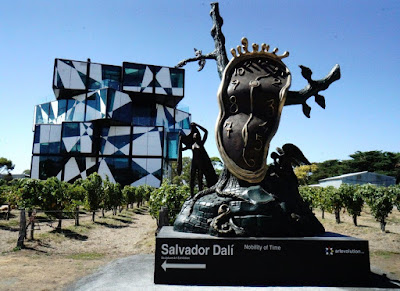 At the same time, Chester Osborne is very serious about winemaking, and in particular terroir. As we share these interests, he organized a tasting of eight components of the Dead Arm, d'Arenberg's flagship wine. These components come from different vineyards, all relatively close to the winery, and identified as district 10 and 17 in the scarce earth program.

The geology plays a major role in McLaren Vale, in contrast to say, the Barossa Valley, where soil is the dominant ground factor. This is because there are areas where the soil is quite shallow, and the geology varies in age significantly between districts. 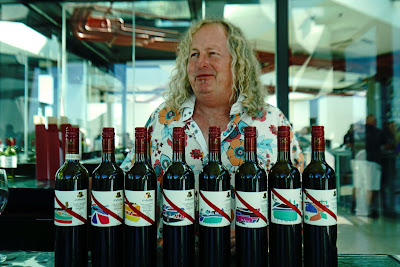 Wild imagery does not stop at the Cube. The wines I tasted, which can be bought separately, have names such as Fruit Bat, The Swinging Malaysian, Dipsomaniac, The Sardanapalian etc. As these wines are quite rare, I will not review them separately. They were all from the 2012 vintage.

A common trait, and a d'Arenberg signature, is the firm and often coarse tannin structure. Apart from that, these wines were quite different from each other in flavour and texture. There were a number of influencing factors: age of the geology, soil, age of the wines (some 25, some 50 years old) and aspect. Some general observations

These differences were as expected, which is a good thing.

My favorite was the 2012 Sardanapalian, from a vineyard on 56 million year old sandstone (this is old) and sandy soils. The vines were only 25 years old. It had interesting savoury flavours, some mint and rhubarb. This is an elegant wine with a silky and long finish.

I would rate all the wines tasted in the 91-94 point range.

The one finished wine I tasted was the 2016 The Ironstone Pressing, d'Arenberg's leading GSM. It has quite a strong raspberry flavour, but is not overwhelmingly sweet. The firm, but fine tannins lead to a long finish (94 points).