In general, I do not take much notice when people describe a vintage as great or poor. Hot or cool, yes, because this can be objectively verified. But in terms of quality, there is so much variation that you can find great wines in so called poor vintages, and poor wines in great vintages. The odds are perhaps against it, but I prefer to look at the individual wine.

2012 was regarded as a pretty good vintage in Piedmont, although dwarfed by 2010 and 2013. So when I opened the 2012 E. Pira Chiara Boschis Via Nuova I was pretty confident this should be a good wine at a good time to drink. The Via Nuova is a blended Barolo. The number of vineyards varies between vintages. In 2012, it is a blend of six vineyards, two each from Barolo, Monforte, and Serralunga. 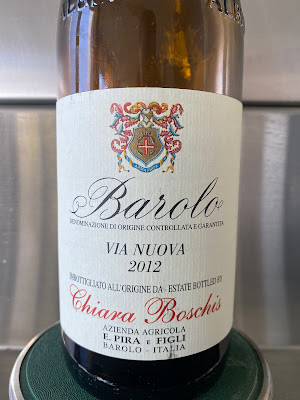 When I opened the bottle, I got a bit concerned. The colour was a quite developed blend of red and brown. I inspected the cork, which was firm and hardly penetrated by wine. Dried flowers and prune notes emerged from the glass.
Being from the southern areas of Piedmont, this is always a full-bodied wine. Unfortunately, this wine lacked energy. The flavours were very earthy with some dried fruit characteristics. The wine still has a good structure with mellowed dry tannins. The finish is long.
This wine is much more developed than it should be at 9 years of age, and is past its best. It could of course be the bottle, but if you have this wine, I suggest you drink it now.
Score: 89/0