When an upstart won best Cabernet Sauvignon and best red wine at the Margaret River wine show in 2013, it created quite a stir. And eyebrows were really raised when this wine was released at three times the price of the Moss Wood Cabernet Sauvignon or Cullen Diana Madeline. This was of course Cloudburst. It certainly had 'bursted' on the scene. Maybe Will Berliner, the American owner, thought this was still cheap by Napa Valley standards. It has since become clear that something very special was happening here. The vines are still young, but they are grown on an unspoiled piece of land near the ocean. It has never seen any pesticides. Instead the care by Will Berliner is exceptional. This is a review of the 2011 Cloudburst Cabernet Sauvignon. 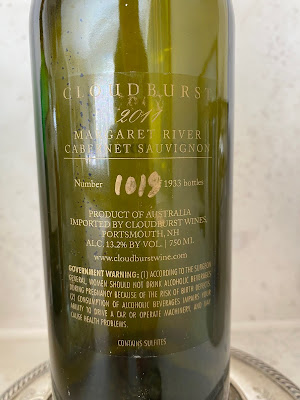 Only the name on the front, and the back rather translucent
The nose is very intense and perfumed with pure dark fruit aromas.
On the palate, blackberry rather than blackcurrant opens up, mulberry and black olive flavours take over. The flavours of this elegant and smooth wine are quite layered, revealing new nuances as one ponders the wine. The wine is full-bodied, but not at all fat, with 13.2% alc. There is good fruit weight and great purity. The wine to me feels more like a first class Merlot. It is powerful, but also light-footed. The tannins are very silky. This wine is still a baby, with a beautiful long finish on fine tannins.
So what about the price? Well, it is actually cheaper that Cullen's Vanya or equal to the Tom Cullity by Vasse Felix. Another way to look at it: would you rather drink a bottle of this or two/three bottles of the Cullen Diana Madeline or the Moss Wood Cabernet Sauvignon? Not sure on an ongoing basis, but I suggest you try a bottle once. Why? This wine is different. It feels very complex and accomplished, yet as the vines are young, it has a different vibrancy to the other wines.
Score: 96/+++
Posted by Alontin at 2:09 PM