When I did my field research in the Barossa close to 10 years ago, I marveled at the old Shiraz and Grenache vineyards of Seppeltsfield. At the time, the Shiraz vineyards were leased to Fosters, later Treasury Wine Estates, I believe. The Grenache went into fortified wines, still. A few years later, a series of still wines of Shiraz were launched, with moderate success. The business changed ownership, and now Seppeltsfield has released a series of premium Shiraz and Grenache. I have not tried the Shirazes yet. They seem quite full-bodied and ripe. However, a few days ago I tasted the 2020 Seppeltsfield Great Terraced Vineyard Grenache. 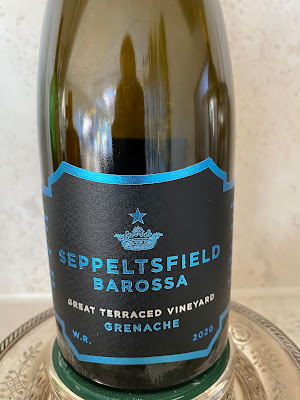 The vineyard is very close to the Torbreck Les Amis vineyard. It was originally planted in 1855, and replanted from 100 years later. I am not sure what you make of the label. Blue does not work for me on wine bottles.
The first thing to say is that if you plan to drink this wine soon (which I would not recommend), decant the wine for at least two hours, and leave some for day two.
The wine presents many different fruit flavours on the palate; raspberry, but mostly dark fruits like blackberry and mulberry. There are savoury notes, in particular licorice and graphite, as well as spice. This is a moorish, full-bodied wine with a lot of complexity. At the same time, it has the typical brightness and vibrancy of Grenache. The tannins are dry and hold a firm grip on the wine's structure.
This is an attractive ripe and powerful Grenache with a long finish. The components have not quite come together just yet, but I have no doubt they will in two to three years.
Score: 95/++