Ethiopia’s claim to fame is its invention of coffee. When monks threw wild growing coffee beans into the fire, they were pleasantly surprised by their pleasant aroma. The rest is history. What is less well known is that wine has also been made here since the 16th century. It is grown in the famous Rift Valley ( famous for its runners) at 1600m altitude.

The number one winery is French owned Castel. They produce an astonishing two million plus bottles each year after they imported 750,000 vines from France in 1997. The vineyard is unusual, as it is surrounded by a two metre high wall to deter pythons, hippopotamuses and hyenas - not your average environment for grape growing. I tasted the Cabernet Merlot and the Syrah from their red grapes. These are not wines that would succeed internationally as fine wine, although 50% is exported. 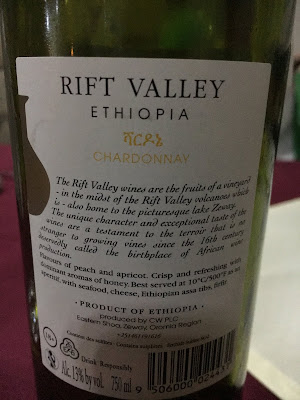 The Chardonnay, only 10% of total production, is a different cattle of fish. The 2017 Castel Rift Valley Chardonnay is a crisp wine, with citrus and passionfruit flavours. The fruit is finely balanced by an attractive level of acidity. This wine is not complex, but perfectly suited to equatorial climates. It finishes dry.