Alex Head is one of the new generation of winemakers in the Barossa who redefine the style of Barossa Shiraz. After the excesses of the drought years of the late 2000s and the Parker style wines, something different had to happen. Alex Head had been at it for a number of years, but then he hit the jackpot with the 2012 vintage. It was perfect: warm, but not extremely hot. He bottles his best wines from single vineyards, a relatively recent development in the Barossa (maybe even I had a bit to do with that). 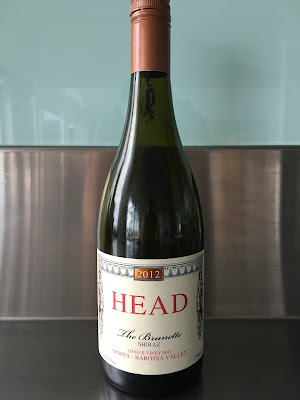 The 2012 Head The Brunette (with reference to Guigal's Brune) comes from the Moppa subregion. Moppa is situated in the Barossa's north, the warmest area, but it is hilly, and the higher elevation gives cooler nights and more natural acidity in the wines.

The wine is under screw-cap, and the primary fruit is still prominent after six years. There is a sweet core of blackberry and black cherry fruit, but the acidity keeps it lively. The wine has a big mouthfeel. It is distinctly Barossan, but the earlier picking keeps the wine fresh. Mocca notes add to the complexity on the palate. The tannins are big, but finely grained, and the finish is long and satisfying.

This is an excellent expression of Barossa Shiraz, with flavour explosion in the mouth and great drinkability at the same time (alcohol 13.9%).