The wines I am discussing today have never been released commercially. However, they are a good test to what extent the subregional differences I described in my book 'Barossa Shiraz' do in fact exist. 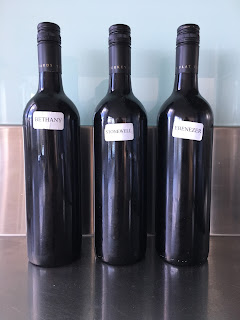 There is a theory which says that the terroir influence increases as the wines age and that the winemaker influence diminishes. Now these wines are all made by the same team and in the same way. They are from the very good 2009 vintage. All three wines show the typical concentrated Barossa Shiraz fruit and give the taster a full mouthfeel.

The 2009 Turkey Flat Bethany Shiraz delivers ripe plum fruit, which I would expect from this area. The core of the wine is quite sweet and a little plump. This is the least appealing of the three wines (88 points).

The 2009 Turkey Flat Stonewell Shiraz comes from this transition area between the Central Valley and Marananga. This wine is still quite lively. It has more acidity than the others and the best balance. The fruit is red plum, and the wine is more delicate than the next one (92 points).

The 2009 Turkey Flat Ebenezer Shiraz expresses the typical features of the Northern Barossa. This is the biggest of the three wines. Apart from the dark fruit, there are meaty flavours and appealing dark chocolate on the palate. The wine is quite smooth and longer on the palate than the other two. But it is not as lively as the Stonewell (92 points).

Overall, the subregional characteristics are there, in particular in wines 1 and 3.
Posted by Alontin at 12:22 PM