The Rockford Basket Press Shiraz was perhaps Australia's first cult wine. It was produced in small volumes, was not available in retail stores, and was made using quirky old equipment including the famous basket press. Although, to be fair, it was not priced like a cult wine, being only marginally more expensive than Rockford's Riesling in the early days. 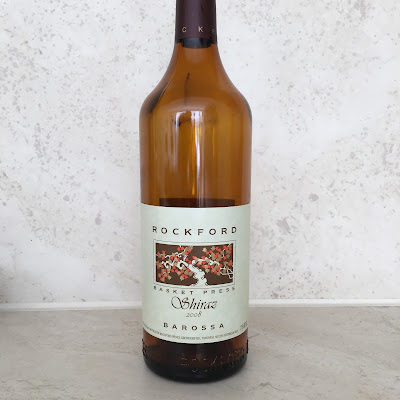 The Basket Press Shiraz in its slightly bulky bottle

As most of the wines I taste and drink come from my cellar, I do not taste blind. However, it is important not to be influenced by famous labels. This became critical in this review of the 2008 Rockford Basket Press Shiraz. 2008 was the second drought vintage in a row in the Barossa. I was prepared for a ripe wine. However, I was not quite prepared for this.

On the positive side, this wine has concentrated fruit flavours, it is quite balanced, not too alcoholic, and its tannins are finely grained. However, this is outweighed by the very ripe character of the fruit, which taste like dried prunes. The wine is dull and fairly tired.